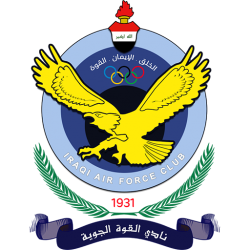 Al-Quwa Al-Jawiya (Arabic: نادي القوة الجوية الرياضي‎, lit. 'Air Force Athletic Club') is an Iraqi football club based in Rusafa District, Baghdad that competes in the Iraqi Premier League, the top-flight of Iraqi football. Founded in 1931, it is the oldest existing football club in Iraq.

It is also one of Iraq's most successful clubs having won six Iraqi Premier League titles, the most recent being in the 2016–17 season, and a further national league title in 1973–74. The club has won four Iraq FA Cups as well as a joint-record three Iraqi Elite Cups, adding to the four league titles and one cup that it won when domestic competitions were played at regional level. It is also the first of only two clubs to win all four major national trophies (League, FA Cup, Elite Cup, Super Cup) in the same season (1996–97).

On the continental level, Al-Quwa Al-Jawiya became the first club to win the AFC Cup three times in a row when they triumphed in 2016, 2017 and 2018. The Falcons have participated in the AFC Champions League four times since its foundation in 2002, but failed to advance past the group stage, and the furthest they have reached in the Arab Club Champions Cup is the quarter-final in the 2012–13 edition. Al-Shohada International Stadium (Arabic: ملعب الشهداء الدولي‎, lit. 'Martyrs Stadium') is the most modern football stadium and the first ever stadium solar power plant in the city of Baghdad and the middle-Euphrates area. It can accommodate more than 32 thousand spectators and construction work was completed on December 18, 2019.