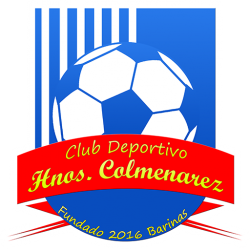 Club Deportivo Hermanos Colmenarez is a Venezuelan football club based in Alberto Arvelo Torrealba Municipality, Barinas. Founded in 2015, the club play in the Venezuelan Primera División, holding their home mathes at the Estadio Agustín Tovar.

Originally founded in 2016, the club first reached the Venezuelan Tercera División in the 2017 season. In December of that year, the club merged with then Tercera División champions Madeira Club Lara Asociación Civil (which was founded on 19 February 2015), and started to play in the Segunda División.

In 2020, after two seasons with mid-table positions, Hermanos Colmenarez won the second division after defeating Llaneros de Guanare in the semifinals and Universidad Central de Venezuela in the finals. Estadio Agustín Tovar, also known as Estadio La Carolina, is a multi-purpose stadium in Barinas, Venezuela. It is currently used mostly for football matches and it is the home stadium of Zamora FC. The stadium holds 30,000 people and was completed in 2007.