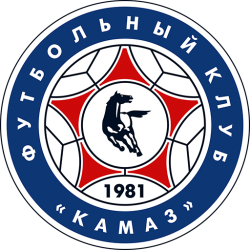 KAMAZ (Russian: Футбольный клуб КАМАЗ Набережные Челны) is a Russian football club based in Naberezhnye Chelny, Russia. In the 2021–22 season, the club will play in the second-tier Russian Football National League.

The club was founded on 11 November 1981 at the KAMAZ plant under the name Trud-PRZ. The team played in local tournaments until 1988, when they entered Soviet Second League.

KAMAZ stayed in this league until 1992, when following the collapse of the Soviet Union they were entitled to play in the Russian First League. They won the Centre Zone tournament and were promoted into the Top League.

The best result achieved by KAMAZ in the Top League was a 6th position in 1994. It allowed the club to participate in the Intertoto Cup, where KAMAZ reached the semifinals, defeating München 1860 in the group stage.

On 15 June 2021, the club secured first place in their PFL group and promotion back to FNL.

KAMAZ Stadium is a multi-purpose stadium in Naberezhnye Chelny, Russia. It is currently used mostly for football matches and is the home stadium of FC KAMAZ Naberezhnye Chelny. The stadium was built in 1977 and after reconstruction in 2016 holds 6,248 people.