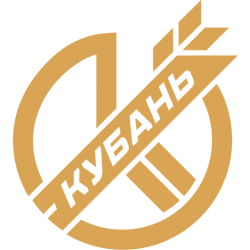 PFC Kuban Krasnodar (Formerly FC Urozhay, Russian: Футбольный клуб «Урожай») is a Russian football team based in Krasnodar. It was founded on 4 June 2018. In the 2021–22 season, it will play in the second-tier FNL.

Private limited company Football Club Urozhay was officially registered on 4 June 2018. Originally it was to be named Ekaterinodar, but eventually, for unknown reasons, the Club was named Urozhay. According to the results of the local web portal's Yuga.ru poll about the team's name that was held from 5 to 14 June, the poll option Urozhay took the last place. On 22 June 2018 FC Urozhay received a license for participating in the third-tier Russian Professional Football League in the 2018–19 Russian Professional Football League.

In July 2020 the club was renamed to PFC Kuban. On 24 July 2020, Russian Football Union approved the change of name, with the condition that the club is not the legal successor to former FC Kuban and cannot claim their sporting history.

On 15 June 2021, the club secured the first place in their PFL zone and promotion to Russian Football National League.

Kuban Stadium (Russian: «Кубань») is a multi-purpose stadium in Krasnodar, Russia. It is currently used mostly for football matches and is the home stadium of resurrected FC Kuban Krasnodar and FC Urozhay Krasnodar. The stadium holds 35,200 people. The stadium was opened on 30 October 1960.

When built, the stadium had a capacity of 20,000. Later a second tier for additional 20,000 people was added and floodlights installed. First football match on Kuban Stadium was held on 14 May 1961, when Spartak Krasnodar played FC Spartak Stavropol.