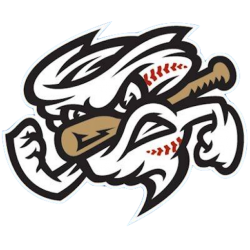 The Omaha Storm Chasers are a Minor League Baseball team of the Triple-A East and the Triple-A affiliate of the Kansas City Royals. They are located in Papillion, Nebraska, a suburb southwest of Omaha, and play their home games at Werner Park which opened in 2011. The team previously played at Johnny Rosenblatt Stadium, home to the College World Series, from 1969 to 2010.

The team has been the only Triple-A affiliate of the Kansas City Royals since their inception in the 1969 Major League Baseball expansion. They were originally known as the Omaha Royals when they were established as a member of the Triple-A American Association in 1969. They joined the Pacific Coast League (PCL) in 1998, and were briefly known as the Omaha Golden Spikes (1999–2001) before reverting to their Royals name. They rebranded as the Storm Chasers in 2011. In conjunction with Major League Baseball's restructuring of Minor League Baseball in 2021, the team was organized into the Triple-A East.

In 2016, Forbes listed the Storm Chasers as the 29th-most valuable Minor League Baseball team with a value of $27 million.

Werner Park is a minor league ballpark near Papillion, Nebraska, a suburb southwest of Omaha. Opened ten years ago in 2011, it is owned by Sarpy County and is the home of the Omaha Storm Chasers (formerly Royals) of the Triple-A East, and USL League One soccer club Union Omaha.

The club moved from Rosenblatt Stadium in south Omaha (in Douglas County) into Werner Park on December 17, 2010. The ballpark cost $36 million to construct and is located near 126th Street and Highway 370, less than three miles (5 km) west of Papillion in unincorporated Sarpy County. Since 2013, the Omaha Mavericks have used the venue for some home college baseball games.