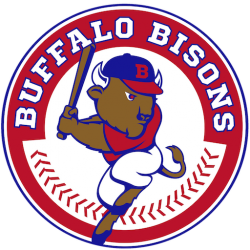 The Buffalo Bisons are a Minor League Baseball team and the Triple-A East affiliate of the Toronto Blue Jays. Located in Buffalo, New York, the team plays their home games at Sahlen Field, the highest-capacity Triple-A ballpark in the United States. The team is playing their 2021 season at Trenton Thunder Ballpark in Trenton, New Jersey, as the Blue Jays are using Sahlen Field because of the COVID-19 pandemic.

Trenton Thunder Ballpark, formerly known as Mercer County Waterfront Park and Arm & Hammer Park, is a ballpark in Trenton, New Jersey. It is the home park for the Trenton Thunder, a collegiate summer baseball team of the MLB Draft League. They were previously a Double-A level Minor League Baseball team of the Eastern League (1980–2020). For 2021, it is also serving as the home of the Triple-A East's Buffalo Bisons, as their regular stadium, Sahlen Field, is being used by the Toronto Blue Jays due to travel restrictions brought on by the COVID-19 pandemic. The official seating capacity is 6,440.