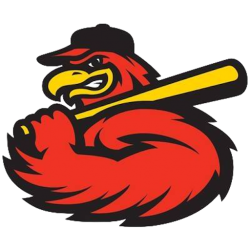 The Rochester Red Wings are a Minor League Baseball team of the Triple-A East and the Triple-A affiliate of the Washington Nationals. They are located in Rochester, New York, and play their home games at Frontier Field, located in downtown Rochester. Founded in 1899, they are the oldest continuously operating sports franchise in North America below the major league level.

Since the widespread adoption of the minor league farm system in the 1920s, the Red Wings have been affiliated with four Major League Baseball clubs, an unusually stable series of relationships. They were the top farm team of the St. Louis Cardinals for 32 years (1929–1960), Baltimore Orioles for 42 years (1961–2002), and Minnesota Twins for 18 years (2003–2020). They then became the Triple-A affiliate of the Nationals in 2021.

The Red Wings, along with the Pawtucket Red Sox, hold the record for the longest professional baseball game, lasting a total of 33 innings and 8 hours, 25 minutes over the course of three different days. The game was held at Pawtucket's McCoy Stadium, beginning on April 18, 1981. It was suspended just after 4 a.m. the next morning, and Rochester lost, 3–2, when the game resumed on June 23.

Frontier Field is a baseball stadium located at One Morrie Silver Way in downtown Rochester, New York. It has been the home of the Rochester Red Wings of the Triple-A East since 1997. The park opened in 1996, replacing Silver Stadium in northern Rochester, which had been home to professional baseball in Rochester since 1929. Although the stadium was built for baseball, Frontier Field has had several tenants in numerous sports, including the Rochester Raging Rhinos of the United Soccer Leagues from 1996 to 2005, and the Rochester Rattlers of Major League Lacrosse from 2001 to 2002. The ballpark seats 10,840 spectators for baseball.

Rochester-based telecommunications company Frontier Telephone of Rochester has held the naming rights to the ballpark since its opening in 1996. Frontier Field hosted the Triple-A All-Star Game on July 12, 2000.