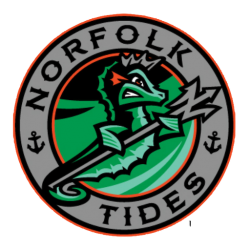 Harbor Park is a stadium, used primarily for baseball, on the Elizabeth River, in downtown Norfolk, Virginia. Once rated the best minor league stadium by Baseball America, it is home to the Norfolk Tides Minor League Baseball team. The Tides are the Baltimore Orioles' Triple-A farm team and compete in the Triple-A East. Harbor Park opened on April 14, 1993, and can seat 11,856 people.