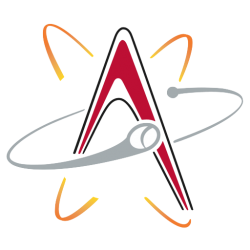 The Albuquerque Isotopes are a Minor League Baseball team of the Triple-A West and the Triple-A affiliate of the Colorado Rockies. They play home games at Rio Grande Credit Union Field at Isotopes Park in Albuquerque, New Mexico, at an elevation of 5,100 feet (1,555 m) above sea level.

In 2003, the Calgary Cannons moved from Alberta to Albuquerque and became the Isotopes playing in the Pacific Coast League. The team was affiliated with the Florida Marlins until 2008 and the Dodgers from 2009 to 2014. In conjunction with Major League Baseball's restructuring of Minor League Baseball in 2021, the Isotopes were organized into the ten-team Triple-A West. The team won division titles in 2003, 2009, and 2012; it has never won a league championship.

The Isotopes' mascot is Orbit, a yellow, orange, and red alien. In 2016, Forbes listed the team as the 14th-most valuable Minor League Baseball team with a value of $34 million.

Rio Grande Credit Union Field at Isotopes Park, previously known only as Isotopes Park, is a minor league baseball stadium located in Albuquerque, New Mexico, and is the home field of the Albuquerque Isotopes of the Triple-A West, the Triple-A affiliate of the Colorado Rockies. The facility was also previously used by the baseball program of the University of New Mexico. The stadium also hosts New Mexico United, an expansion team in the United Soccer League that began play in 2019.