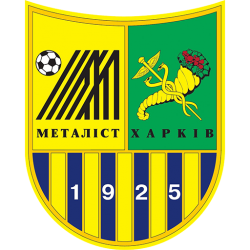 Football Club Metalist Kharkiv (Ukrainian: Футбо́льний Клуб Металі́ст Ха́рків ) is a Ukrainian football club based in Kharkiv that will play in the Ukrainian First League during the 2021–22 season. It was revived 5 years after the original FC Metalist Kharkiv ceased operations.

Founded in 1925, FC Metalist Kharkiv had worked its way up the rungs of the Soviet football system, eventually being promoted to the Soviet Top League in 1960. After a difficult period which included relegation, Metalist was promoted to the Top League again in 1982, where it remained until the league's dissolution.

The club won the Soviet Cup once, and were also runners-up once. They have also won silver medals of the 2012–13 Ukrainian Premier League and six bronze medals of the Ukrainian Premier League, starting from the 2006–07 season. Their home was the Metalist Stadium, a multi-use facility with a capacity of 40,003. The stadium was originally built in 1926 and was expanded to host Euro 2012 football matches.

Metalist ceased operations in 2016 due to insolvency. It was removed from the Ukrainian Premier League after owner Serhiy Kurchenko absconded in February 2014, following the 2014 Ukrainian revolution.

Following the demise of Metalist Kharkiv in 2016, two new clubs were created in Kharkiv with variations of the Metalist club name. Since July 2016, a team named "SK Metalist Kharkiv" has been playing in the Kharkiv Oblast Championship, whose owner is former Metalist owner Serhiy Kurchenko.

In October 2017, a Ukrainian court confiscated (the original) Metalist Kharkiv from Kurchenko and placed it under state property. At the time the club did not participate in any official sanctioned competitions.

Also, in July 2020 former FC Metalist sports director Yevhen Krasnikov created FC Metal Kharkiv which since has participated in the Ukrainian Second League. After winning the Second League in June 2021, it was confirmed that Metal will be renamed to Metalist and the old FC Metalist Kharkiv logo will be returned to the club, along with its brand and history.