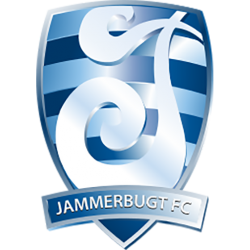 Jammerbugt Fodbold Club is a Danish association football club currently playing in the Danish 2nd Division. They play at Jetsmark Stadion in Pandrup, North Jutland, which has a capacity of 6,000. The club was former known as Jetsmark IF, which still is the name of the amateur department, and has also been known as Blokhus FC between 2008 and 2013.

The club was founded on 27 August 1973 as a merger between the two neighbouring clubs Kaas IF and Pandrup Boldklub. As Kaas had been playing in green shirts and Pandrup in white, the new first team shirt of course had to be a mix of those two colours. As their first coach they hired Preben Larsen who, for a long time, had been an influential first team player in AaB.

The club was capable of having teams spread across all of the six lowest Danish divisions in their first season, and the first home game on the new ground – which was opened on 7 April 1974. It was against Frederikshavn fI in the sixth-tier Series 1. The game was eventually won by Jetsmark IF after a goal scored just a few minutes before the final whistle by Arne Johansen. After a long period with teams competing in Series 2 and 3, and none of them looking to promote to the higher tiers in the near future, hopes of playing in a higher division suddenly were suddenly fueled, when a group of former players established the organisation "Team Jetsmark", whose only purpose was to find players, staff, and funds to make the club return to Series 1. With Torben Nielsen as the head coach, that goal was achieved in 1992.

However, the greatest highlight of the club's history so far is considered to be the promotion to the third-tier Danish 2nd Division in 2002. After a 3–1 win in Herning, the club could celebrate their victory. Jetsmark IF also reached the round of 16 in the 2003 edition of the Danish Cup, but Helsingør IF finally knocked them out.

An elite superstructure went into effect on 1 July 2008 for the first senior team under the name Blokhus FC. On 26 February 2013, the club's general assembly decided to change the name from Blokhus FC to Jammerbugt FC. The club started using the new name in the spring of 2013 in match programmes, advertisements etc., but it would not be used officially in tournaments organized by the Danish Football Association (DBU) until the following season.