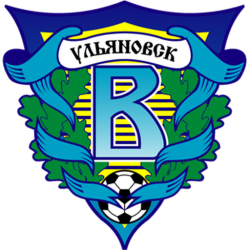 FC Volga Ulyanovsk (Russian: ФК «Во́лга» Улья́новск) is a professional association football club based in Ulyanovsk, Russia. In 2008, they were relegated to the Russian Second Division 2009 after they finished 17th in Russian First Division. In December 2008, Volga signed a partnership agreement with Floriana FC of Malta, the most successful club in Maltese football.

Trud Stadium is a bandy arena in Ulyanovsk, Russia. It is the home arena of bandy club Volga-SDYuSShOR, which is playing in the second-tier Russian Bandy Supreme League. With a higher spectator capacity than the more modern Volga-Sport-Arena in the same city, the semi-final Russia participated in and the final of the 2016 Bandy World Championship were played at Trud.

During the summer, the arena is used by an association football team FC Volga Ulyanovsk.