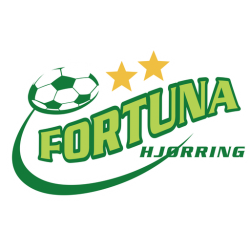 Fortuna Hjørring is a women's association football team from Hjørring, Denmark. The club was formed in 1966 and play in green and white. Their biggest achievement in European football was reaching the 2002–03 UEFA Women's Cup final where they ultimately lost 1–7 on aggregate to Umeå IK. They are one of the two most successful clubs in Danish women's football, with among 11 titles.

The next try at a European Cup came in 2009–10 with the newly created UEFA Women's Champions League. In the round of 32 they defeated Italians Bardolino but then lost the round of 16 to eventual finalist Lyon. In the 2016–17 season they reached their best result since the final in 2003, when they made it to the quarter-finals which they lost 0–2 on aggregate to Manchester City.

Hjørring Stadium (Danish: Hjørring Stadion) is a multi-purpose stadium located in Hjørring, Denmark, that is part of Femhøje Sport Center, and hence also known as Femhøje Stadion – Hjørring. It is currently used mostly for association football matches and is the home stadium of Fortuna Hjørring and Vendsyssel FF. The stadium, which is owned and operated by Hjørring Municipality, has a maximum capacity of 10,000 people of which 3,100 are seats. The attendance record of 7,919 spectators was set on 3 June 1973 in a match in the western group of Danish 3rd Division between Hjørring IF and local rivals Frederikshavn fI. It has been known as Nord Energi Arena for sponsorship reasons since July 2017 and had previously been referred to as Bredbånd Nord Arena (2015–2017).