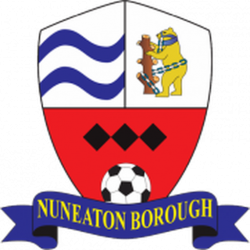 Nuneaton Borough Football Club is an English football club that is based in Nuneaton, Warwickshire. The men's 1st team competes in the Southern League Premier Division Central, the seventh tier of English football.

In 1889, Nuneaton St. Nicholas FC was the first team in Nuneaton to play senior football. In 1894, the 'Nicks' changed their name to Nuneaton Town Association Football Club, which they played under until 1937 when the club was disbanded. Two days later, the club was reformed as Nuneaton Borough F.C. and played under this name until 1991 when the club liquidated for the first time. After the club reformed they changed their name to Nuneaton Borough 1991 F.C. During this time the club had some historic cup victories including a 1–0 win over Division 2 side Stoke City in 2000 and in 2006 they scored a late equaliser at home to Premier league and UEFA Cup side Middlesbrough. Then in 2008 the club was liquidated due to poor financial performance. It was renamed Nuneaton Town and suffered a two-division demotion. During the 2018–19 season the club reverted to its former name Nuneaton Borough F.C. after overwhelming support for the change from supporters.

The club currently plays its home fixtures at Liberty Way, Nuneaton. The club's home colours are blue and white, which are usually represented as vertical stripes. The club is known to some supporters as 'The Boro'.

Liberty Way is a multi-use sports stadium in Nuneaton, Warwickshire, England, which is owned by Nuneaton Town F.C. but is also used by Nuneaton R.F.C., which rents the stadium from the football club. Liberty Way has been used by the rugby club since the 1990s; however, it was a mere pitch with a perimeter fence and nothing like the facilities of the current complex. The current stadium is made up of 4 stands.