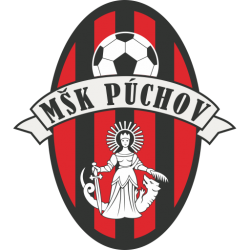 MŠK Púchov is a Slovak football club, playing in the town of Púchov.

In July 2006, the club lost its main sponsor, Matador a.s., and was renamed FK Púchov. The club has two stadiums, currently unusable Mestský štadión due to disagreement with the town of Púchov, and temporary Futbalový štadión Nosice. On 24 June 2013, the official website of FK Púchov announced merging between OTJ Moravany nad Váhom and FK Púchov, as FK Púchov. The club started cooperate with the town. The town is the main sponsor of the club.

The Mestský štadión is a multi-purpose stadium in Púchov, Slovakia, currently used mostly for football matches. It is the home ground of FK Púchov and holds a capacity of 6,080 people.