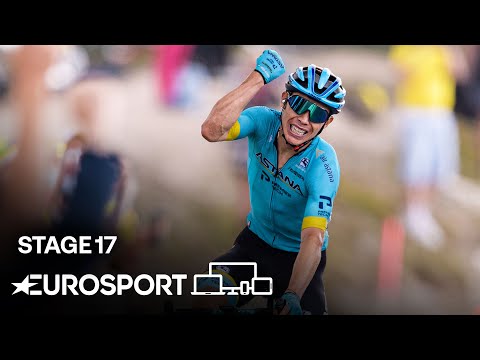 Dubbed as the "Queen Stage" for this year's tour, this stage features two Hors catégorie climbs, both summits reaching above 2000 meters: Col de la Madeleine and Col de la Loze, with the latter being used for the first time on the tour and was the finish line for this stage. Prior to the race, defending champion Egan Bernal announced that he is quitting from the tour.

During the start of the race, five cyclists started to break away from the main peloton, led by Julian Alaphilippe and Richard Carapaz. At the sprint point, green jersey leader Sam Bennett got ahead of Peter Sagan, adding two points to his lead. On the first climb, Carapaz won over Alaphilippe, both increasing their points but still behind King of the Mountains jersey leader Benoît Cosnefroy.Tadej Pogačar secured third place on the summit while in the yellow jersey group. Because of the fast pacing being done by the Team Bahrain McLaren, all of the stage leaders except Carapaz were caught up by the yellow jersey group. While ascending Col de la Loze, yellow jersey leader Primož Roglič and teammate Sepp Kuss, white jersey leader Pogačar, Miguel Ángel López, and Richie Porte were the remaining cyclists from the yellow jersey group, leaving the rest of the leaders group behind. Carapaz was eventually caught up near the 24% gradient part of the ascent while Lopez and Kuss went ahead. GC leaders Roglič and Pogačar tried to chase Lopez, but in the end, Lopez emerged as the winner of the stage and went up to third place in the general classification. As the stage with the highest climb, Lopez also got the Souvenir Henri Desgrange award. Roglič still retained the yellow jersey, while Pogačar got the KoM jersey from Cosnefroy while still retaining the young rider jersey, but his gap from Roglič ballooned to 57 seconds. Bennett retains the green jersey. Alaphilippe got the combativity award for the stage.

Aside from Bernal, Mikel Nieve called it a race. This marked the first time he abandoned a Grand Tour.