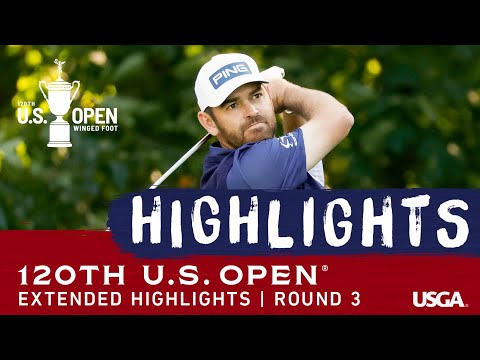 The United States Open Championship, commonly known as the U.S. Open, is the annual open national championship of golf in the United States. It is the third of the four major championships in golf, and is on the official schedule of both the PGA Tour and the European Tour.
U.S. Open play is characterized by tight scoring at or around par by the leaders, with the winner usually emerging at around even par. A U.S. Open course is seldom beaten severely, and there have been many over-par wins (in part because par is usually set at 70, except for the very longest courses). Normally, an Open course is quite long and will have a high cut of primary rough (termed "Open rough" by the American press and fans); undulating greens (such as at Pinehurst No. 2 in 2005, which was described by Johnny Miller of NBC as "like trying to hit a ball on top of a VW Beetle"); pinched fairways (especially on what are expected to be less difficult holes); and two or three holes that are short par fives under regular play would be used as long par fours during the tournament (often to meet that frequently used par of 70, forcing players to have accurate long drives).

The 2020 United States Open Championship is the 120th U.S. Open. It is being played over the West Course at Winged Foot Golf Club in Mamaroneck, New York. Originally scheduled for June 18–21, the tournament was postponed to September 17–20 due to the COVID-19 pandemic. This marked the first time the U.S. Open was held in September since 1913.