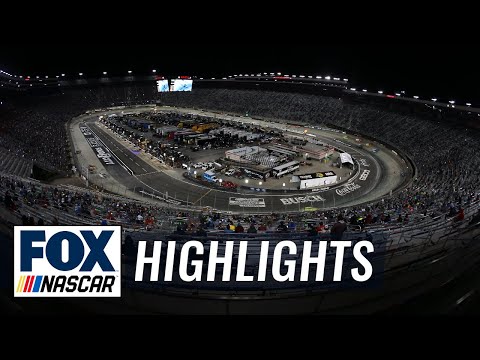 The Bass Pro Shops NRA Night Race is a NASCAR Cup Series stock car race held at Bristol Motor Speedway in Bristol, Tennessee. It is one of two NASCAR Cup Series races held at Bristol, the other being the Food City 500, but it is by far the more popular of the two. From 1978 to 2019, the race has been held in late-August, typically on the last weekend of the month, on a Saturday night.
From 2001 to 2015, Newell Rubbermaid has been the title sponsor of the race, and until 2009 their marker pen brand Sharpie lent its name to the race. Newell Rubbermaid elected to change the race branding to promote one of its other brands, Irwin Industrial Tools. For the 2016 season, the main title sponsor switched to outdoor recreational retailer Bass Pro Shops
In 2020, the race was moved from its traditional August date to mid-September, becoming the NASCAR playoffs' Round of 16 elimination race.

In a battle of two of stock-car racing’s titans, Kevin Harvick swapped the lead with Kyle Busch and held off the defending NASCAR Cup Series champion over an intense string of closing laps to win Saturday’s Bass Pro Shops Night Race at Bristol Motor Speedway.
Harvick picked up his ninth victory of the season, his second of the Round of 16 in the 2020 NASCAR Playoffs and his third at Bristol. The driver of the No. 4 Stewart-Haas Racing Ford finished .310 seconds ahead of Busch. Two drivers who didn’t make the playoffs Jones and Tyler Reddick ran third and fourth