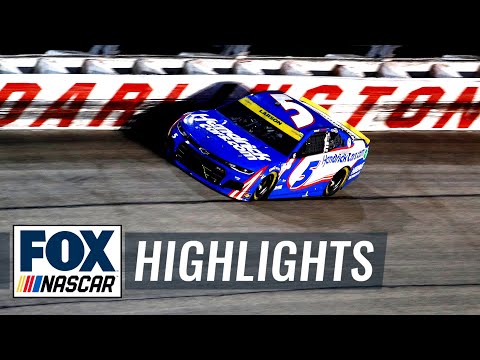 The Southern 500, officially known as the Cook Out Southern 500 for sponsorship reasons, is a NASCAR Cup Series stock car race at Darlington Raceway in Darlington, South Carolina, United States. The race distance is 501 miles (806 km) and consists of 367 laps. From 1950 to 2003, and again since 2015, the race has been held on Labor Day weekend. The Southern 500 is largely considered one of the Crown Jewels of the NASCAR calendar, and has been nicknamed NASCAR's "oldest superspeedway race." For decades, the race has been considered by competitors and media as one of the more difficult and challenging races on the NASCAR schedule, owing much to the track's unusual, asymmetrical egg-shape, rough pavement, and overall unforgiving nature. Darlington Raceway itself has a long and storied reputation as the "Track Too Tough to Tame."

Holding off regular-season champion Kyle Larson throughout a thrilling final green-flag run in Sunday’s Cook Out Southern 500 at Darlington Raceway, Denny Hamlin is winless in 2021 no more.
Hamlin maintained control of his No. 11 Joe Gibbs Racing Toyota as Larson buried his No. 5 Chevrolet into Turns 3 and 4 on the final lap. Larson gave Hamlin a tap, but Hamlin blocked the top lane and got to the finish line .212 seconds ahead of the runner-up.