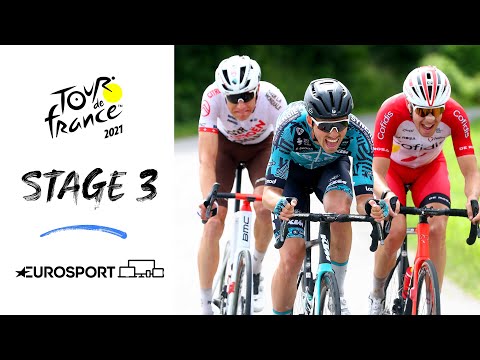 Ring! Ring! Call of the Tour organization for sprinters. Completely flat stage where only a break from several riders will be able to remove the candy from the mouths of the various sprinters that dot the peloton.


Result Description
The third stage of the Tour offered the first chance for the pure sprinters to battle it out for the win. This time, the riders traveled 182.9 kilometres (113.6 mi) from Lorient to Pontivy. The opening third of the stage was mostly flat before the riders traveled on rolling roads for the rest of the stage. There were two fourth-category climbs on the route along with an intermediate sprint after 118.3 kilometres (73.5 mi).

As soon as the flag dropped, a group of five riders broke away from the peloton, including Ide Schelling (Bora–Hansgrohe), who had featured in the break during the previous two days and was deputizing in the polka-dot jersey for classification and race leader Mathieu van der Poel (Alpecin–Fenix). The break's advantage reached a maximum of around three minutes before the sprinters' teams started to chase them. After 37 kilometres (23 mi) of racing, a crash in the peloton brought down Geraint Thomas (Ineos Grenadiers) and Robert Gesink (Team Jumbo–Visma), with the latter eventually having to abandon the race. It was soon reported that Thomas suffered from a dislocated shoulder, but he continued in the race and eventually made it back to the peloton with the help of his team. At the first climb of the day, the Côte de Cadoudal, Schelling attacked to gain the solitary mountain point at the top. This allowed him to take the lead once again in the king of the mountains competition. Shortly afterwards, he dropped back to the peloton to make it a quartet up front. At the intermediate sprint, after the four breakaway riders took the maximum points, Caleb Ewan (Lotto–Soudal) once again outsprinted Mark Cavendish (Deceuninck–Quick-Step) in the battle for the points jersey. Afterwards, the peloton gradually reduced the break's advantage as they prepared themselves for the bunch sprint.

Inside the final 10 kilometres (6.2 mi), several crashes took place in the peloton. The first crash took place close to the ten-kilometre mark and involved Miguel Ángel López (Movistar Team) and Valentin Madouas (Groupama–FDJ). Shortly afterwards, Primož Roglič (Team Jumbo–Visma) crashed heavily on the side of the road. He got up but by the time he started riding again, he was already more than a minute down on the peloton, with most of his teammates trying to pace him back. Shortly after the break was caught with around 5 kilometres (3.1 mi) to go, another crash took place, with Jack Haig (Team Bahrain Victorious) among those to fall; Haig was eventually forced to abandon the race. Tadej Pogačar (UAE Team Emirates), David Gaudu (Groupama–FDJ), Rigoberto Urán (EF Education–Nippo), and Thomas were also held up in the crash but they were able to escape unscathed. Inside the flamme rouge, the sprinters prepared themselves for the final sprint. However, Ewan went down following a touch of wheels also taking down Peter Sagan (Bora–Hansgrohe) in the process. While Sagan was able to continue in the race, Ewan needed medical attention and eventually had to abandon due to a fractured collarbone. In the final sprint, Jasper Philipsen (Alpecin–Fenix) led out teammate Tim Merlier for the win, with Philipsen himself holding off Nacer Bouhanni (Arkéa–Samsic) to make it a one-two finish for Alpecin–Fenix. In the aftermath of the crashes, several contenders lost time. A group containing Enric Mas (Movistar Team), Vincenzo Nibali (Trek–Segafredo), Jakob Fuglsang (Astana–Premier Tech), Nairo Quintana (Arkéa–Samsic), and Wilco Kelderman (Bora–Hansgrohe) lost 14 seconds at the line. The group containing Pogačar, Gaudu, Urán, and Thomas lost 26 seconds at the finish. The biggest time loss was suffered by Roglič as he lost almost a minute and a half at the line.

In the GC, Mathieu van der Poel (Alpecin–Fenix) was able to stay in the front group and thus kept the malliot jaune. Julian Alaphilippe (Deceuninck–Quick-Step) also avoided the crashes to retain his second place. Richard Carapaz (Ineos Grenadiers), the only GC contender to not be held up by the crashes, moved up to third at 31 seconds behind.