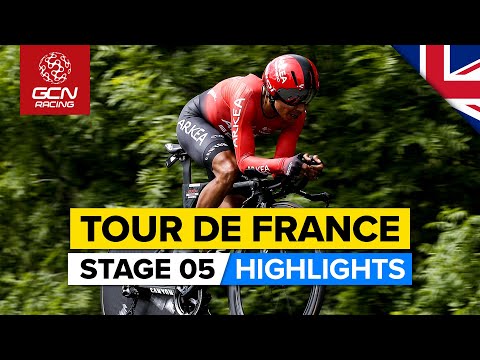 It is not just any time trial, it is the longest time trial stage of the decade in the first week of the Tour. What's more, since 2008 there has not been an individual event of this caliber. Therefore, be careful with the differences, that much of the podium in Paris may well be worth the time that is achieved in the CRI that there is this season.


Result Description
The fifth stage featured the first of two tests against the clock in this year's Tour as the riders faced a 27.2 kilometres (16.9 mi) course between Changé and Laval. The course was not totally flat and featured rolling roads. There were two intermediate time checks at 8.8 kilometres (5.5 mi) and at 17.2 kilometres (10.7 mi).

Being an ITT, the riders set off in reverse order to their GC positions. As such, Amund Grøndahl Jansen (Team BikeExchange) was the first rider off the start ramp. He was also the first finisher of the stage as he set a time of 37' 04". The first rider to stay in the hot seat for a long time was Mikkel Bjerg (UAE Team Emirates). He set the quickest times at the two intermediate time checks before setting a time of 33' 01". Soon after, rain started falling on the route, affecting several riders. One of the riders affected was Stefan Bissegger (EF Education–Nippo), one of the favorites for the stage win. Having nearly crashed at one point, Bissegger would eventually set a time of 33' 22", 21 seconds slower than Bjerg's time. Bjerg's teammate, Brandon McNulty, was another rider severely affected by the bad weather. McNulty crashed early on in his ride, and he ended up with the slowest time on the day. After a few minutes, the rain stopped falling. The first rider to beat Bjerg's time was Mattia Cattaneo (Deceuninck–Quick-Step). He was six seconds up on Bjerg at the first time check before being two seconds slower at the second time check. He finished with a time of 32' 55", six seconds faster than Bjerg. However, his time was quickly beaten by Stefan Küng (Groupama–FDJ), the reigning European time trial champion. He was the quickest at all time checks before setting a time of 32' 19", 36 seconds quicker than Cattaneo.

Soon, the focus shifted to the GC contenders, starting with Primož Roglič (Team Jumbo–Visma), having lost a minute due to his crash two days earlier. Despite this, Roglič was still able to set a time of 32' 44", good enough for ninth on the stage. His teammate, Jonas Vingegaard, fared even better with a time of 32' 27", the third best time of the day. Another GC rider affected by injuries was Geraint Thomas (Ineos Grenadiers), but unlike Roglič, he struggled on his bike, eventually stopping the clock at 33' 18". Alexey Lutsenko (Astana–Premier Tech) and Rigoberto Urán (EF Education–Nippo) set times of 33' 00" and 33' 08", respectively; their results were good for 10th and 13th on the day. To end the stage, the top ten riders took to the course. Pierre Latour (Team TotalEnergies), despite not being a TT specialist, was 15th quickest on the day as he set a time of 33' 14". Enric Mas (Movistar Team), Nairo Quintana (Arkéa–Samsic), and David Gaudu (Groupama–FDJ) struggled on the route as they lost between two to two and a half minutes on the day. Soon, defending champion Tadej Pogačar (UAE Team Emirates) went off the start ramp. He smashed Küng's time at both time checks before setting a time of 32' 00", beating Küng's time by 19 seconds and becoming the only rider to average 51 kilometres per hour (32 mph) on the day. His time would not be beaten as he took his first stage win in this year's Tour. Wout van Aert (Team Jumbo–Visma), the Belgian time trial champion, was expected to challenge for the win but he only set the fourth-quickest time of 32' 30", 30 seconds behind Pogačar's time. Richard Carapaz (Ineos Grenadiers) and Wilco Kelderman (Bora–Hansgrohe), two riders in the top five in the GC, both lost considerable time and conceded almost two minutes to Pogačar. Julian Alaphilippe (Deceuninck–Quick-Step), the winner of the time trial in Pau two years ago, was only able to manage a time of 33' 11". The last rider to go down the start ramp was Mathieu van der Poel (Alpecin–Fenix), the wearer of the maillot jaune. Although he expected himself to lose the yellow jersey, he was able to set the fifth-quickest time of 32' 31", only 31 seconds behind Pogačar's time and enough to keep the maillot jaune.

In the battle for the GC, Pogačar rose to second, only eight seconds behind van der Poel. Van Aert moved up to third at 30 seconds down while Alaphilippe dropped down to fourth, 48 seconds behind. Lutsenko, Latour, and Urán also moved up the standings but at almost a minute and a half behind van der Poel. Vingegaard moved up to eighth as a result of his third-place finish in the time trial. Three of Pogačar's rivals for the Tour victory, Roglič, Carapaz, and Thomas now lie almost two minutes down on Pogačar.