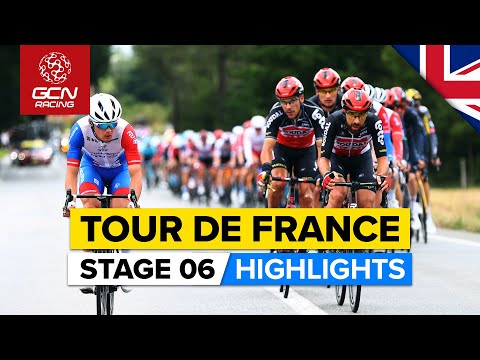 The sixth stage of the race featured a flat course from Tours to Châteauroux and offered another chance for the sprinters to battle it out for the stage win. There was a single fourth-category climb on the route while the intermediate sprint took place with 56.3 kilometres (35.0 mi) to go.


Result Description
A few kilometres from the start of the stage, a high-profile eight-man break, including Thomas De Gendt (Lotto–Soudal), Greg Van Avermaet (AG2R Citroën Team), Kasper Asgreen (Deceuninck–Quick-Step), and Søren Kragh Andersen (Team DSM), broke away from the peloton. The break also featured other riders from sprinters' teams. The best-placed GC rider from the break was Asgreen, sitting in 11th at 1' 49" down on race leader Mathieu van der Poel (Alpecin–Fenix). With most of the sprinters' teams represented in the break, it was up to Groupama–FDJ and Arkéa–Samsic, other sprinters' teams who had no riders in the break, to chase the group. The group led by as much as a minute before the gap began to come down. With 143 kilometres (89 mi) to go, the break split in half before eventually regrouping. However, the presence of Asgreen, resulting in a lack of cooperation, meant the group was eventually caught but not before Van Avermaet soloed off the front. The only rider to bridge up to him was Roger Kluge (Lotto–Soudal). The pair gained an advantage of around two minutes before being chased down. The duo would also take maximum points at the intermediate sprint. In a messy sprint for the remaining points on offer, Sonny Colbrelli (Team Bahrain Victorious) took third ahead of Michael Mørkøv (Deceuninck–Quick-Step).

With 20 kilometres (12 mi) to go, the pair's advantage was down to just 13 seconds before the peloton slightly eased off, allowing the pair to build their advantage once again. With 10 kilometres (6.2 mi) to go, the break still had an advantage of 40 seconds, but the peloton was starting to close in on them. The pair was eventually caught with 2.5 kilometres (1.6 mi) to go as the sprinters' teams prepared themselves for the sprint. With the final 1.6 kilometres (0.99 mi) of the stage being on a straight road all the way to the line, the lead-out trains prepared for the final sprint; chief among those trains were Deceuninck–Quick-Step and Alpecin–Fenix. From the latter team, Stage 3 winner Tim Merlier once again tried to lead out his teammate Jasper Philipsen, with points classification leader Mark Cavendish (Deceuninck–Quick-Step) switching from the wheel of his lead-out man Mørkøv to that of Philipsen. In the last 150 metres, Cavendish would come around both Alpecin–Fenix riders to win his 32nd Tour stage win. Philipsen took second while Nacer Bouhanni (Arkéa–Samsic) finished third. With his win, it marked the third time that Cavendish won in Chateauroux; the first was in 2008 when he took his first Tour stage win before winning there again in 2011. He also increased his lead in the points classification to 46 points over Philipsen. van der Poel finished safely in the peloton to retain the malliot jaune, with the top ten on GC unchanged.