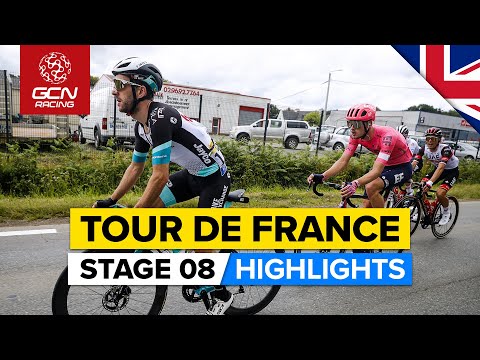 The best climbers in the peloton have their first big test. The fight for the red dot jersey and for the first places in the general standings will begin this day with five scoring heights, the last three being in the first category, especially Col de la Romme and Col de la Colombiere perfectly chained before from the descent to Le Gran-Bornand. Prepare your chronometers that today there will be differences.


Result Description
The race headed to the Alps for the first time in this year's Tour on stage 8, with the riders travelling from Oyonnax to Le Grand-Bornard. From the get-go, the riders tackled 5 kilometres (3.1 mi) of an uncategorized climb, providing a launchpad for the break to get away. The intermediate sprint took place after 44.8 kilometres (27.8 mi) before the riders headed into the mountains. After two climbs, third- and fourth-category respectively, the riders took on three first-category climbs. The first of these was the Côte de Mont-Saxonnex, a 5.7 kilometres (3.5 mi) climb with an average gradient of 8.3 per cent. A short descent led to the foot of the Col de Romme , 8.8 kilometres (5.5 mi) long with an average gradient of 8.9 per cent. Another short descent led to the final climb of the day, the Col de la Colombière, 7.5 kilometres (4.7 mi) long with an average gradient of 8.5 per cent. The riders topped the Colombière with 14.7 kilometres (9.1 mi) to go. Eight, five, and two bonus seconds, respectively, were awarded to the first three riders across the top. The riders then reached the finish in Le Grand-Bornard after a descent and a short flat section.

With an uncategorized climb to start the day, several riders attempted to attack before Wout Poels (Team Bahrain Victorious) soloed off the front. A chasing group immediately formed while the peloton rode closely behind. Near the top of the climb, an injured Geraint Thomas (Ineos Grenadiers) was unable to maintain the pace. On the descent, the peloton split, with Pierre Latour (Team TotalEnergies), sitting in the top ten on GC, among the riders caught out. Later, another injured pre-race favorite, Primož Roglič (Team Jumbo–Visma) was dropped on the flat section. These three GC contenders would each finish over 30 minutes down on the stage, with their GC aspirations all but dashed. At this point, no breakaway had stuck. At the intermediate sprint, Sonny Colbrelli (Team Bahrain Victorious) took maximum points ahead of Michael Matthews (Team BikeExchange). At one point, Tadej Pogačar (UAE Team Emirates) found himself in the breakaway but soon rejoined the main peloton. On the first first-category climb of the day, Poels attacked solo once again. Eventually, with 77 kilometres (48 mi) to go, the peloton settled down while a chase group formed, which eventually caught Poels. They built their advantage over the UAE Team Emirates-led peloton as they neared the top of Côte de Mont-Saxonnex. Poels was first over the top of the first-category climb, putting him in the lead of the king of the mountains competition.

Just before the second category-one climb of Col de Romme, the Team DSM duo of Søren Kragh Andersen and Tiesj Benoot attacked from the break. In the peloton, a crash involving Jonas Vingegaard (Team Jumbo–Visma) and Stefan de Bod (Astana–Premier Tech) took place, but both riders were able to get back to the peloton. As the break reached the Col de Romme, Michael Woods (Israel Start-Up Nation) attacked, eventually passing Kragh Andersen, and soloing off the front. The break fragmented as a chase group formed in pursuit of Woods. Woods gained an advantage of more than a minute on the chasers as he took maximum mountain points at the top while Poels took second in the chasing group. Soon, the break reached the final category-one climb of the day, the Col de la Colombière. At this point, Woods started to fade and his advantage gradually came down. 3 kilometres (1.9 mi) from the top, Dylan Teuns (Team Bahrain Victorious) caught Woods while the chasing group began to fragment. A kilometre from the top, Teuns dropped Woods as he soloed to the top. He kept his advantage all the way to the line, soloing to the stage win.

In the main peloton, UAE Team Emirates controlled the group of contenders for much of the day. As they reached the Col de Romme, Davide Formolo increased the pace in the group and dropped the maillot jaune, Mathieu van der Poel (Alpecin–Fenix), while Wout van Aert (Team Jumbo–Visma) and Julian Alaphilippe (Deceuninck–Quick-Step) also began to struggle. With 4 kilometres (2.5 mi) to the top of the Romme, Pogačar launched an attack and only Richard Carapaz (Ineos Grenadiers) was able to stay with him. After Carapaz refused to work, Pogačar accelerated once again, dropping Carapaz for good. Pogačar gradually increased his advantage over Carapaz while also passing the remnants of the breakaway. At the top of the Colombière, Pogačar had increased his advantage to more than three minutes over Carapaz while also getting to within 20 seconds of catching Teuns. On the descent to the finish, Pogačar avoided taking risks, with Woods and Ion Izagirre (Astana–Premier Tech) eventually catching him. Izagirre eventually finished second, more than 40 seconds behind Teuns with Woods taking third. Pogačar finished fourth on the day at almost 50 seconds behind Teuns. On the descent from the Colombière, Carapaz was caught by the group of the other contenders, eventually finishing more than four minutes behind and conceding more than three minutes to Pogačar. Van Aert tried to limit his losses but he had lost more than five minutes by the end.

In the GC, Pogačar took the maillot jaune with a lead of almost two minutes on van Aert. Alexey Lutsenko (Astana–Premier Tech) moved up to third, more than four and a half minutes behind. From third to ninth in the GC, the riders were separated by less than a minute and a half from each other. Pello Bilbao (Team Bahrain Victorious) climbed into tenth, almost seven minutes behind Pogačar.