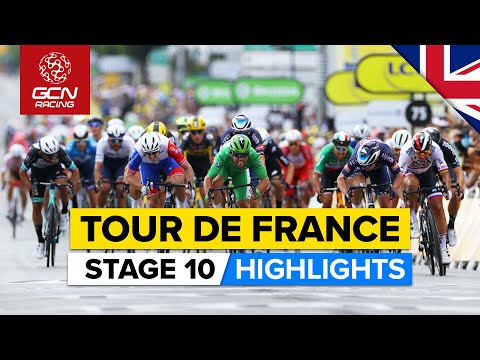 Albertville, which at the time hosted an Olympic Games. In winter, it is the starting point of a stage that runs through a mountainous area, such as the Isere area, but which has hardly any ascents, except for a fourth-grade tack, on its way to Valence. A suitable stage for a getaway or for a sprint arrival.


Result Description
On the first stage after the first rest day, riders travelled from Albertville to Valence on a mostly flat course. There was an early fourth-category climb, the Col de Couz, at 7.4 kilometres (4.6 mi) long and averaging just under 3 percent. The intermediate sprint took place at the top of an uncategorized climb to La Placette, 108.4 kilometres (67.4 mi) from the finish. With around 41 kilometres (25 mi) left, there was another uncategorized 5.6-kilometre (3.5 mi) long climb up to Beauregard-Baret that averaged just under 4 per cent, which provided an opportunity to put the pure sprinters under difficulty. The course after the descent was flat all the way to the line, with a threat of crosswinds on the way to the finish.

As soon as the flag dropped, Hugo Houle (Astana–Premier Tech) and Tosh Van der Sande (Lotto–Soudal) established the day's main breakaway. The pair gained a maximum advantage of six minutes before a group containing Sonny Colbrelli (Team Bahrain Victorious) attempted to break away. The move was quickly shut down before Team DSM began to lead the chase of the duo up front, with Tim Declercq (Deceuninck–Quick-Step) also contributing to the chase. At the only categorized climb of the day, Houle took the only point on offer while the peloton crossed the top at three and a half minutes behind. Just before the intermediate sprint, a minor crash in the peloton involved Mads Pedersen (Trek–Segafredo), Simon Yates (Team BikeExchange), and Julien Simon (Team TotalEnergies), but all three escaped generally unscathed. After the duo up front took maximum points at the intermediate sprint, Colbrelli outsprinted Michael Matthews (Team BikeExchange) and Jasper Philipsen (Alpecin–Fenix) to close in on Mark Cavendish's (Deceuninck–Quick-Step) lead in the points classification as Cavendish was briefly dropped on the unclassified climb.

With around 61 kilometres (38 mi) to go, there was another crash in the peloton, with Richie Porte (Ineos Grenadiers) the most prominent of the riders involved; Porte sustained a scrape to his left elbow but was otherwise able to continue. On the final uncategorized climb, the breakaway was caught, with van der Sande dropping back first while Houle remained out in front slightly longer to win the stage's combativity award. At this point, Team BikeExchange tried to drop the pure sprinters on the final uncategorized climb, albeit unsuccessfully. It was also around this point that a cross-tailwind began to affect the peloton as several teams attempted to form echelons. With 28 kilometres (17 mi) to go, Colbrelli suffered an untimely puncture, forcing him to change his bike. He was down by nearly 40 seconds at one point but he would eventually make it back after a brief lull in the action. Inside the final 20 kilometres (12 mi), there were several splits in the peloton, with race leader Tadej Pogačar (UAE Team Emirates) getting briefly caught out at one point.

Despite several attempts to split the peloton, no GC contender was caught out, and the sprinters' teams began to set up for the finish. In the final sprint, Deceuninck–Quick-Step — with Kasper Asgreen, Davide Ballerini, and Michael Mørkøv — once again successfully led out Cavendish for the stage win, his third in this year's Tour and his 33rd career Tour stage win. Wout van Aert (Team Jumbo–Visma) closed fast along the barriers to take second, while Philipsen came up along the other side of Cavendish to finish third. Pogačar and the other contenders finished safely in the main peloton as the GC remained unchanged ahead of the "double Ventoux" stage.