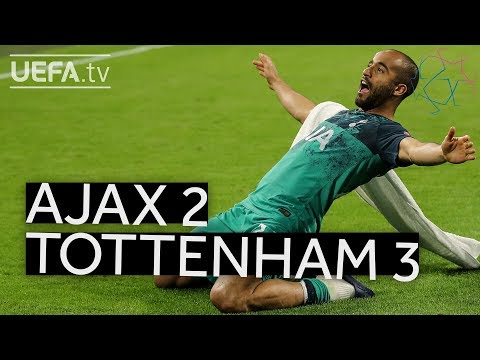 Lucas Moura scored a dramatic 96th-minute winner to cap an astonishing Tottenham fightback against Ajax and set up an all-English Champions League final against Liverpool.

Trailing 1-0 from the first leg, Spurs made the worst possible start in Amsterdam when a towering fifth-minute header by 19-year-old Ajax captain Matthijs de Ligt doubled the advantage for Erik ten Hag's exciting young side.

Tottenham hit the post through Son Heung-min before Hakim Ziyech doubled Ajax's lead on the night with a sweeping finish after an assist by former Southampton winger Dusan Tadic.

That left Spurs 3-0 behind on aggregate yet, in another pulsating semi-final, Mauricio Pochettino's side scored twice within five minutes in the second half.

Moura reduced the deficit with a composed finish before the Brazilian's shot on the turn, after keeper Andre Onana had denied substitute Fernando Llorente, levelled the scores on the night and left Spurs requiring one goal to reach the final in Madrid on 1 June.

In a frantic finish, Vertonghen headed against the bar from four yards before Moura completed his hat-trick with a left-foot shot from 16 yards deep into stoppage time as Spurs won on away goals to reach their first Champions League final.

It will be the second all-English final in the competition after Manchester United beat Chelsea on penalties in Moscow in 2008.

An ecstatic Mauricio Pochettino celebrates after his side's late, late winner
Pochettino could not contain his emotions at the final whistle and shed tears of joy as he celebrated wildly with his players on the pitch. The Argentine, who marks his fifth anniversary in charge of Spurs later this month, was on his knees after a night that rivalled the jaw-dropping drama of Liverpool's incredible semi-final victory over Barcelona on Tuesday.

Harry Kane, who is still recovering from an ankle injury, also joined his team-mates on the pitch at the end after their extraordinary comeback.

Spurs looked dead and buried when Ziyech's outstanding first-time finish after a cut back by Tadic made it 3-0 on aggregate before half-time but they somehow pulled themselves together.

Moura was the inspiration, producing three clinical finishes, the third and decisive goal coming when he picked the ball up from Dele Alli's flick and shot across Onana.

He is only the fifth player to score a Champions League semi-final hat-trick, and first since Cristiano Ronaldo in May 2017 for Real Madrid against Atletico Madrid.

This was a significant hurdle for Spurs to clear.

They had lost their three previous semi-finals, including an agonising penalty shootout defeat by Chelsea in this season's Carabao Cup.

Having moved into a new £1bn stadium last month, these are exciting times for Spurs as they chase a first trophy in 11 years.

With another top-four Premier League finish all but sealed, they are one win away from being crowned champions of Europe.

This after they took only one point from their first three group stage games and required late goals to beat PSV Eindhoven and Inter Milan, before an 85th-minute goal from Moura against Barcelona in the Nou Camp took them through to the knockout stage.

Yet the four-time champions of Europe will need some time to recover after being denied a first appearance in the final since 1996 in the dying moments.

Boasting a three-goal aggregate advantage at half-time, their fans were in party mood before Tottenham's amazing comeback.

De Ligt's early header from a corner after Hugo Lloris had denied Tadic was followed by Ziyech's clever finish and left Spurs with a mountain to climb.

Little did they know what was to come as the visitors, inspired by the exceptional Moura, produced an epic turnaround.


Result Description
Full English - the stats
The 2019 Champions League final will be only the third major European final in history to feature two English teams, after the 1972 Uefa Cup final (Spurs v Wolves) and 2008 Champions League final (Man Utd v Chelsea).
Spurs are only the second team in Champions League history to lose the first leg of the semi-final at home and progress to the final - the other was Ajax in 1995-96 against Panathinaikos.
Ajax defender Matthijs de Ligt became the fourth teenager to score in a Champions League semi-final, after Nordin Wooter (1996, Ajax), Obafemi Martins (2003, Inter Milan) and Kylian Mbappe (2017, Monaco).
Spurs will be the eighth different English team to feature in a European Cup/Champions League final, after Arsenal, Aston Villa, Chelsea, Leeds United, Liverpool, Manchester United and Nottingham Forest. England have had more different teams in the final of the competition than any other nation.
English teams have come from two or more goals behind to win on seven occasions in Champions League history - four more than clubs of any other nation. Indeed, four of the past five occasions have been English teams.
Spurs were the first team to come two goals behind to win in a Champions League semi-final match since Manchester United in 1999 against Juventus.