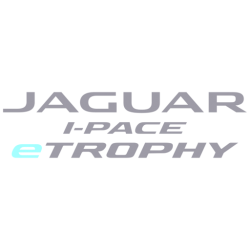 The Jaguar I-Pace eTrophy was a battery electric zero-emission international motor racing series supporting the FIA Formula E Championship which ran two seasons from late 2018 to mid 2020. The series would be cancelled after the 2019–20 season due to the COVID-19 pandemic. The eTrophy saw entrants compete in a race prepared Jaguar I-Pace, with the races taking place on selected Formula E weekends.

Overview
The series was announced on 12 September 2017 at the Frankfurt Autoshow by chairman of Jaguar Racing Gerd Mäuser and Formula E CEO Alejandro Agag.

The I-Pace racecar (carrying the same name as the series itself) was built by Jaguar Land Rover Special Vehicle Operations, and developed from the road going Jaguar I-Pace. Both the road going and racing versions of the I-Pace benefit from electric drive technology developed as part of Jaguar Racing's I-TYPE Formula E program.

On 11 January 2018, it was announced that Michelin would be the official tire supplier for the series.

Format
The series operated an 'Arrive and Drive' package for up to 20 drivers at each race, including a different VIP driver at every venue.

Much like its parent series, the race weekend began on the day before an ePrix with a shakedown session. It was usually the first on-track activity of the whole weekend. Unlike Formula E, the free practice session was also held on this day. A 30-minute qualifying session along with the race was then held the next day. Races were scheduled for 25 minutes + one lap.

For the 2019–20 season, Jaguar adopted the "attack mode" system from its parent series.

The inaugural season saw eleven full-time entries with four teams entered in the Pro class and three teams entered in the Pro-Am class. Sérgio Jimenez from Jaguar Brazil Racing became the Pro Champion, while Bandar Alesayi from Saudi Racing won in the Pro-Am competition. There were nine different VIP drivers, with Alice Powell being the most successful, finishing fifth at the 2018 Ad Diriyah ePrix. The second season started with eight and finished with ten full-time entries. Simon Evans from Team Asia New Zealand won the Pro class by just one point, while Fahad Algosaibi from Saudi Racing dominated the Pro-Am class. There were six different VIP drivers, with Mario Domínguez finishing third at the 2020 Mexico City ePrix, the all-time best result for a VIP driver.