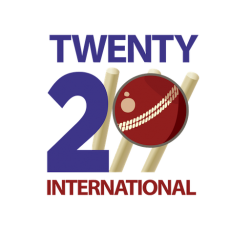 A Twenty20 International (T20I) is a form of cricket, played between two of the international members of the International Cricket Council (ICC), in which each team faces a maximum of twenty overs. The matches have top-class status and are the highest T20 standard. The game is played under the rules of Twenty20 cricket. Starting from the format's inception in 2005, T20I status only applied to Full Members and some Associate Member teams. However, in April 2018, the ICC announced that it would grant T20I status to all its 105 members from 1 January 2019.

The shortened format was initially introduced to bolster crowds for the domestic game, and was not intended to be played internationally, but the first Twenty20 International took place on 17 February 2005 when Australia defeated New Zealand, and the first tournament was played two years later, with the introduction of the ICC T20 World Cup. In 2016, for the first time in a calendar year, more Twenty20 International matches (100) were played than ODI matches (99). As of 3 May 2019, 80 nations feature in ICC T20I team rankings.

Twenty20 International format also sees one mandatory powerplay taken in the first six overs. This shorter format of the game makes reaching the traditional milestones of scoring a century or taking five wickets in an innings more difficult, and few players have achieved these. The highest individual score in a Twenty20 International is 172, made by Australia's Aaron Finch against Zimbabwe in 2018, while India's Deepak Chahar has the best bowling figures of 6/7 against Bangladesh in November 2019.