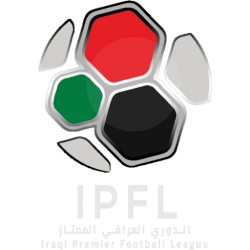 The Iraqi Premier Football League (Arabic: الدوري العراقي الممتاز‎, romanized: Al-Dawri Al-Iraqi Al-Mumtaz) is the highest league in the league system of Iraqi football and currently contains the top 20 Iraqi football clubs. It is controlled by the Iraq Football Association (IFA) and operates on a system of promotion and relegation with the Iraq Division One in which two teams get relegated and two teams get promoted each season.

The league was formed by the IFA in 1974 as the Iraqi National League of Clubs, the first nationwide league of clubs in Iraq. The current format sees 20 teams playing 38 matches each (playing each team in the league twice, home and away), totalling 380 matches in the season.