Ruben Ira Loftus-Cheek (born 23 January 1996) is an English professional footballer who plays as a midfielder for Premier League club Chelsea and the English national team.

Club career
Chelsea
Loftus-Cheek joined Chelsea at the age of eight. He impressed at the beginning of the 2011–12 season before picking up a hip injury, from which he recovered by the end of the season to make a substitute appearance in the 2012 FA Youth Cup final. In the 2012–13 season, Loftus-Cheek made 18 appearances for the U-18 squad and nine appearances for the U-21 squad, at the end of the season he was rewarded for his good form to travel with a place in the first-team squad for a post season friendly against Manchester City in May 2013. In 2013–14, Loftus-Cheek helped Chelsea win the FA Youth Cup and was a regular for the U21s as they won the Under-21 Premier League.

Loftus-Cheek playing for Chelsea in 2014
Loftus-Cheek made his senior debut for the club on 10 December 2014, replacing Cesc Fàbregas for the final 7 minutes of a UEFA Champions League group match against Sporting CP at Stamford Bridge; Chelsea won 3–1 having already come first in the group. He played his first Premier League match on 31 January 2015, coming on for Oscar in added time at the end of a 1–1 home draw against Manchester City.

On 13 April, Loftus-Cheek played for Chelsea in the final of the 2014–15 UEFA Youth League against Shakhtar Donetsk in Switzerland, which ended with a 3–2 victory for Chelsea. On 10 May 2015, Loftus-Cheek was awarded his first start against Liverpool at Stamford Bridge, playing 60 minutes and recording a 100% pass completion record, before being replaced by Nemanja Matić, in a match that ended in a 1–1 draw. Although Loftus-Cheek only made three league appearances out of the whole season, Mourinho stated that he would receive a winner's medal for his contributions this season.

2015–16 season
On 29 August 2015, Loftus-Cheek made his first appearance coming off the bench against Crystal Palace as Chelsea suffered their first home defeat of the season. On 10 January 2016, Loftus-Cheek came on as a half-time substitute for Oscar in an FA Cup match against Scunthorpe United, and scored his first senior goal of his career in the 68th minute of the match, which Chelsea won 2–0. Excluding John Terry, he became the first player to have been at Chelsea since before the age of 15 and score for them since Carlton Cole 10 years and 3 days earlier.

On 29 February 2016, Loftus-Cheek signed a new five-year deal after impressing when given the chance in the first team. He scored his first league goal on 2 April, scoring the opener in a 4–0 win against Aston Villa away. After scoring his first league goal, Loftus-Cheek continued to be in the starting line-up in the following two matches against Swansea City and Manchester City.

Loftus-Cheek playing for Chelsea in 2015
Under new manager, Antonio Conte, Loftus-Cheek was deployed as a striker, playing alongside Diego Costa during preseason. After the loan departure of Bertrand Traoré, Loftus-Cheek was handed the number 14 shirt prior to the season's beginning, switching from his previous number 36.

On 23 August 2016, Loftus-Cheek made his first appearance of the season, starting against Bristol Rovers in the Second round of the EFL Cup. He started the build-up of the first goal, as well as providing the assist to the third goal scored by Michy Batshuayi, which turned out to be the winner of a 3–2 victory. He received a standing ovation as he was coming-off for Oscar in the 82nd minute, and was also praised by Conte after the match.

Loan to Crystal Palace
On 12 July 2017, Loftus-Cheek joined fellow Premier League club Crystal Palace on a season-long loan. He made his debut on the opening day of the season during their 3–0 home defeat against Huddersfield Town, playing for the full 90 minutes. On 25 November 2017, Loftus-Cheek scored his first goal for the London side in a 2–1 victory over Stoke City. Following some impressive form, Loftus-Cheek was rewarded with a senior call-up by manager Gareth Southgate to the England squad for their fixtures against Germany and Brazil in November 2017.

Return from loan
For the 2018–19 season, Loftus-Cheek was included in the Chelsea first team and assigned the number 12 shirt. On 25 October 2018, he scored a hat-trick in a Europa League home match against BATE Borisov, which ended in a 3–1 win for Chelsea. Three days later, he scored his first league goal of the season away to Burnley. He scored in back-to-back league games in December, against Fulham in a 2–0 home win and Wolverhampton Wanderers in a 2–1 away loss. On 5 May, Loftus-Cheek scored the opener against Watford in a 3–0 home win that eventually secured Champions League football for the following season. In the next match, the second leg of the Europa League semi-final at home to Eintracht Frankfurt, he scored in a 1–1 draw, with Chelsea prevailing 4–3 on penalties. He was ruled out of the final, however, after he suffered an achilles injury during a charity match against New England Revolution.

International career
Loftus-Cheek first represented England at under-16 level in 2011 and then progressed through to the U17, U19 and U21 teams. In 2015, he received his first call up to the England U21 team, being named in the provisional squad for the European Championship after impressing for the U19s and breaking into the senior Chelsea team.

In 2016, Loftus-Cheek took part in the Toulon Tournament with England and scored what proved to be the winning goal in the final against France. After the match, he was named Player of the Tournament, becoming the first English player to win the award since Alan Shearer in 1991.

He received his first call-up to the England senior squad in November 2017. Following his first senior call-up, Loftus-Cheek went onto make his England debut during their friendly fixture against Germany, in which he featured for the full 90 minutes, winning man of the match after an impressive performance in the 0–0 draw.

Style of play
After his first-team debut, Barney Ronay of The Guardian described Loftus-Cheek as an "intriguing" player of "long-striding grace" saying that with his "shielding, covering, deep-playmaking presence with a calmness in possession and a naturally telescopic reach" he would be a good fit for the senior England national team. Loftus-Cheek was compared to Germany great Michael Ballack by former Chelsea and England manager Glenn Hoddle, who said that: "He reminds me of Ballack – physically and the way he plays", and went on to say: "He gets in the box and he moves well off the ball."

Throughout his career, Loftus-Cheek has been playing either as a central or defensive midfielder, but former Chelsea manager Antonio Conte stated that he sees Loftus-Cheek with the potential of a striker since he has "good technique, good personality and he is good one vs one." 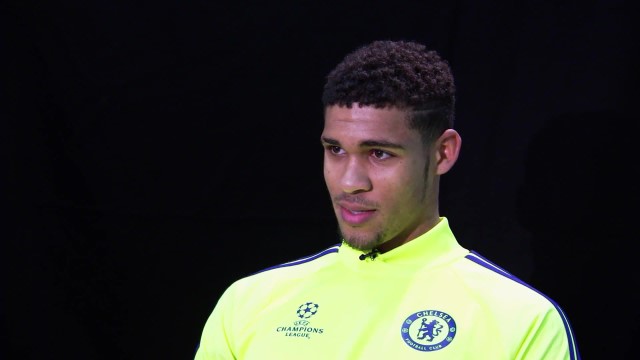