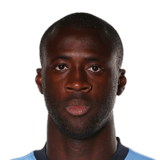 Gnégnéri Yaya Touré (born 13 May 1983) is an Ivorian retired professional footballer who played as a midfielder and last played for Chinese Super League club Qingdao Huanghai.

Touré aspired to be a striker during his youth and has played centre-back, including for Barcelona in the 2009 UEFA Champions League Final. However, he has spent the majority of his career as a box-to-box midfielder for club and country, where he has been regarded as one of the world's best players in his position. One of the greatest African players of all time, Touré was voted African Footballer of the Year for 2011, 2012, 2013 and 2014.

Touré began his playing career at Ivorian club ASEC Mimosas, where he made his debut at age 18. His performances attracted attention from Europe. He had stints with Beveren, Metalurh Donetsk, Olympiacos and Monaco before moving to Barcelona in 2007. He played over 100 matches for the club and was part of the historic 2009 Barcelona side that won six trophies in a calendar year. In 2010, Touré moved to Premier League club Manchester City, where he scored a number of key goals, most notably the only goals in the 2011 FA Cup semi-final and final. He also helped City earn their first league title in 44 years.