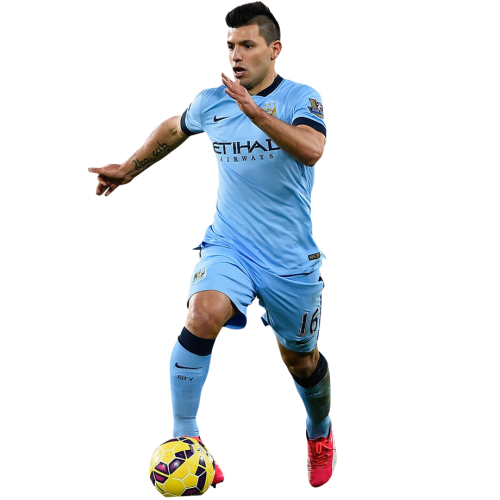 Sergio Leonel Agüero del Castillo (born 2 June 1988), also known as Kun Agüero, is an Argentine professional footballer who plays as a striker for La Liga club Barcelona and the Argentina national team. He wears "Kun" on his shirt, a childhood nickname based on the title character from the cartoon Kum-Kum. He is considered one of the greatest strikers of all time and one of the greatest players in the history of the Premier League, during his decade-long association with Manchester City.

Agüero began his career at the Argentine Independiente where, on 5 July 2003, he became the youngest player to play in the Argentine Primera División at 15 years and 35 days, breaking the 27 year record previously set by Diego Maradona. In 2006, Agüero moved to La Liga club Atlético Madrid in a transfer worth €23 million, establishing himself as one of the world's best young players, winning the Don Balón, the Golden Boy, and the World Soccer Young Player of the Year. Agüero also won the UEFA Europa League and the UEFA Super Cup while in Madrid.

Agüero signed for Premier League club Manchester City in 2011 in a transfer for a reported fee of £35 million. During his 10 years at the club, he won five league titles, including scoring a last minute winner in the final league game of his debut season, to win the club its first league title in 44 years. The club's all-time top goalscorer, he is also the fourth all-time Premier League goalscorer and the highest non-English scorer in the competition, with 184 goals; the most Premier League goals scored by a player for any single club. Agüero also won a Premier League Golden Boot, was twice included in the PFA Team of the Year, and holds the record for most Premier League hat-tricks, with twelve. He also won a record six EFL Cups, an FA Cup, and reached the club's maiden UEFA Champions League final. In 2021, he joined Barcelona on a free transfer.