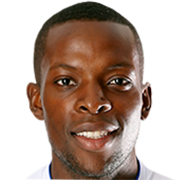 Chinedum "Nedum" Onuoha (born 12 November 1986) is an English professional footballer who plays as a defender for Championship club Queens Park Rangers. He is a defender, typically a centre back, but he can also play at right back or left back.

Born in Warri, Delta State, Nigeria, Onuoha was brought up in Manchester, England. He went to Nelson Street Primary School Miles Platting before becoming a pupil at the Hulme Grammar School, Oldham, where he achieved eight grade 'A's' and two 'B's' at GCSE. He then completed his studies at Xaverian College Manchester where he achieved three 'A' grades at A-level in Maths, Business Studies and IT. An outstanding junior sprinter; aged 14 he finished in second place in the final of the 2001 English School's Athletics Association Junior 100 metres contest, clocking 11.09 seconds and beating current Great Britain sprinter Craig Pickering.

He is also currently the co-national record holder for boys under 15 standing triple jump, in the Sports Hall events held annually throughout the UK, the record is held with international long jumper Jonathan Moore.