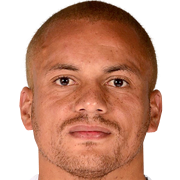 Wesley Michael Brown (born 13 October 1979) is an English professional footballer who plays as a defender for Indian club Kerala Blasters.

Born in Longsight, Manchester, Brown began his career with Manchester United, joining the club's academy at the age of 12 in 1992. After turning professional in 1996, he made his senior debut in 1998 and became a regular first team player during the 1998–99 season, when the club won the Treble. After a year-long hiatus due to injury, Brown became a regular fixture in the first team from 2000 onwards. Over the next eight years, he won numerous honours, including four more Premier League titles, an FA Cup, a League Cup and another Champions League. Former United manager Sir Alex Ferguson has stated that Brown is "without question the best natural defender this club has had for years". After 15 years with Manchester United, Brown was allowed to leave for Sunderland.

Brown earned his first England cap in 1999 and was selected to play at the 2002 World Cup. He played in the UEFA Euro 2008 qualifiers but England failed to progress to the final tournament. He scored his first international goal in 2008 against the Czech Republic. Brown announced his retirement from international football on 8 August 2010, just a day after being recalled to the England squad by Fabio Capello.