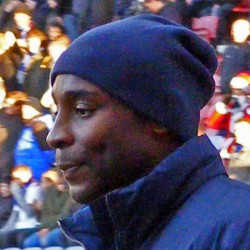 Born in Park Royal, London, Roberts was playing football from an early age, and spent time in the youth academies at several professional clubs, but was not retained. After a spell in non-league football with Hayes, he joined Wolverhampton Wanderers in 1997. He failed to make a first-team appearance for Wolves, and had loan spells at Torquay United and Bristol City before signing for Bristol Rovers in 1998. He quickly established himself in the first team, scoring 38 goals in his two seasons at the club.

After the club failed to gain promotion, Roberts handed in a transfer request and was sold to West Bromwich Albion in July 2000. His goals helped the team reach the First Division play-offs in his first season at the club. West Brom then won promotion to the Premier League in the following season. Roberts scored three goals in his first Premier League season as the club were relegated back down to the First Division. He was loaned out to Portsmouth at the start of the 2003–04 season, and was then sold to Wigan Athletic in January 2004. Roberts went on to score 21 goals in Wigan's promotion-winning campaign in the 2004–05 season, and won the club's Player of the Year award at the end of the season. His goals in the following season helped the club finish tenth in its inaugural Premier League campaign, as well as taking the team to the 2006 Football League Cup Final at the Millennium Stadium – the club's first ever major cup final.

After failing to agree a new contract with the club, he was sold to Blackburn Rovers in 2006, where he played European football for the first time. He made over 150 appearances for Blackburn, scoring 28 goals. In 2007, he established the Jason Roberts Foundation, and was awarded an MBE for services to sport in 2010 New Year Honours – Grenada. In 2011, he began working as a presenter for BBC Radio 5 Live's 6-0-6 programme. In January 2012. he signed for Reading on an eighteen-month contract and helped them to promotion from the Football League Championship as champions.

On 20 March 2014, he announced his immediate retirement from the game due to persistent injuries.