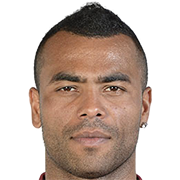 Ashley Cole (born 20 December 1980) is an English former footballer who played as a left back, most notably for Premier League club Chelsea, with whom he presently serves in the coaching staff for the U15 team. Cole is considered by many critics and fellow professional players as one of the best defenders of his generation, and by some, for the better part of his career, as the best left back in the world. Born in Stepney, London, Cole began his youth career at Arsenal and made his full debut for the club in November 1999, going on to make 228 appearances and scoring nine goals for the North London club. With Arsenal he won two Premier League titles, three FA Cups, and was an integral member of "The Invincibles" team of the 2003–04 season, who went the entire league season undefeated. Cole also made an appearance in Arsenal's first UEFA Champions League final in 2006; the club lost 2–1 to Barcelona.

In August 2006, after a protracted transfer saga, Cole completed a move to rival club Chelsea, with whom he won further honours, including the Premier League in the 2009–10 season, four FA Cups, one Football League Cup and one UEFA Champions League. He was released by Chelsea at the end of the 2013–14 season. With seven winners' medals, Cole has won the FA Cup more times than any other player in history, and is one of two players to have won the Double with two clubs, along with Nicolas Anelka.