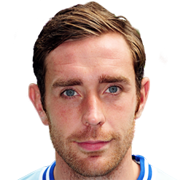 Richard John Keogh (born 11 August 1986) is a professional footballer who most recently played as a defender for Championship club Derby County and the Republic of Ireland national football team.

Keogh began his career as a trainee at Ipswich Town and Stoke City, making his professional debut on loan from the latter at Icelandic club Víkingur in 2004. He joined Bristol City on a free transfer in 2005 and made his Football League debut in September of that year. He made several more appearances that season before spending a month on loan at Wycombe Wanderers, then going on to appear sporadically for Bristol City at the end of the season, scoring his first goal in April 2006. Keogh was a regular in the first team the following season, playing 43 times in all competitions and scoring four goals. However, he found himself out of favour in the 2007–08 season, spending time out on loan at Huddersfield Town, Carlisle United and Cheltenham Town. At the end of the season, he joined Carlisle United for an undisclosed fee.

Keogh was a first-team regular for Carlisle, playing 95 times and scoring six goals in all competitions for the Cumbrians over two seasons and also a short loan spell. He also won the club's Player of the Year Award for the 2009–10 season. At the end of the season, he joined Coventry City on a free transfer and was again a near ever-present, playing 95 league and cup matches across two seasons, scoring one goal. Keogh was named the Player of the Year for the 2011–12 season, although the club was relegated from the Championship. However, he remained in the league, signing for Derby County for a fee of over £1 million. He has played over 200 matches for the club, won the club's Player of the Year Award for the 2012–13 and 2015–16 seasons and was named in the 2014–15 PFA Team of the Year.

Although Keogh was born in Essex, he has represented the Republic of Ireland at under-19, under-21 and senior level. As of September 2016, he has won 15 caps and scored once.