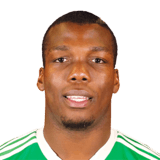 Florentin Peilé Pogba (born 19 August 1990) is a Guinean international footballer who plays as a defender for Atlanta United in MLS.

Personal life
Born in Conakry, the capital of Guinea, Pogba and his family moved to Roissy-en-Brie in France when he was only eight months old. Pogba has two brothers who are also professional footballers; twin brother Mathias played for Tours and younger brother Paul plays for Manchester United and the French national team.

Club career
Florentin began his youth career playing for several clubs in Île-de-France. It was here that he came to the attention of Spanish side Celta Vigo and signed for them in 2007, although he never made an appearance for their senior team. After spending two seasons in the youth ranks at Celta, he had a trial with Sedan in August 2009. After a successful trial he joined up with Sedan's reserve team, and after one season in the reserves, he signed his first professional contract in March 2010. On 20 November 2010, Pogba made his first appearance with the first team in a 2–0 win against amateur side FC Steinseltz in the Coupe de France. A few months later, on 5 February 2011, he made his league debut in a 1–0 defeat against Boulogne. Despite the result, Florentin's performance was praised, and he kept his place in the team. On 20 September, in the following season, Florentin scored his first goal for Sedan, a header from a corner against Troyes.

On the final day of the summer transfer window in 2012, Pogba was transferred to AS Saint-Étienne for a fee of €500,000. He was then immediately loaned back to Sedan for the remainder of the 2012–13 season. After returning to Saint-Étienne in 2013, he initially struggled to break into the team in his first season with the club. He scored his first goal for the club on 3 December, in a 2–0 win against Montpellier HSC. By this time, he had well and truly established himself as the first choice centre-back at the club, displacing long time Saint-Étienne defender Loic Perrin. Unfortunately, Pogba picked up a serious injury whilst on international duty with Guinea. It was initially feared that he would miss the rest of the season but he returned against Nice in the 36th match week of the season.

In January 2018, after 86 appearances and 3 goals for Saint-Étienne, Pogba was transferred to Turkish club Gençlerbirliği on a short-term contract. On 6 May 2018, Pogba was involved in a confrontation with teammates during a crucial game against Antalyaspor. Gençlerbirliği were losing 0–1 when Pogba limped off the pitch and took off his shirt in the 88th minute. The Ankara side, fighting to avoid relegation, had already used the allowed three substitutions. Gençlerbirliği captain Ahmet Oğuz, furious that he was going to leave them with ten men, confronted Pogba, who turned around and walked on to face his teammate as other players and staff were forced to separate the duo. He became a free agent upon the expiry of his contract.

In January 2019, he went on trial with Spanish club Elche.

International career
Pogba was handed his first call up to the Guinea squad by Michel Dussuyer ahead of a friendly match against Mali on 11 August 2010. He made his international debut in the second half of the game, helping his team to a 2–0 victory.

Nine months later, Pogba accepted a call-up to play for the France under-20 team in the 2011 Toulon Tournament. Pogba was allowed to do this because FIFA's regulations allow players with dual nationality to change their allegiance if they haven't yet played a competitive match for a country, which he hadn't yet done with Guinea. France went on to reach the final, but lost out to the Colombia under-20 team 3–1 on penalties. Pogba was one of the French players to miss a penalty.

On 24 March 2013, Pogba pledged his international future to Guinea, and he played his first competitive game for them in a 2014 World Cup qualifying match against Mozambique. After struggling to play regular club football in the 2013–14 season, he also struggled to get into the Guinea team. However, after forcing his way into the Saint-Étienne side during the following season, he was able to return to his place in the Guinea team.