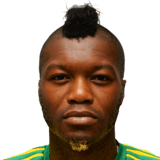 Djibril Cissé (born 12 August 1981) is a French footballer who plays as a striker.

He started his career at AC Arles in 1989, at the age of eight. After seven years at the club, he had a six-month spell at Nîmes Olympique, before moving to Auxerre, joining the club's youth system. Cissé spent two years in the system, before graduating to the first team in 1998. After playing for Auxerre for six seasons, scoring 90 goals in 166 appearances, he moved to Premier League club Liverpool in 2004.

During his time at Anfield, Cissé played 79 games, scoring 24 times and winning the 2004–05 UEFA Champions League and 2005–06 FA Cup. He went on to play in Greece with Panathinaikos, Italy with S.S. Lazio, Qatar with Al-Gharafa and Russia with Kuban Krasnodar. He also had further spells in English football with Sunderland and Queens Park Rangers, and France with Olympique de Marseille and SC Bastia. In 2015, Cissé made one appearance for Réunion based club JS Saint-Pierroise, before retiring from professional football. In the course of his career, Cissé suffered from two leg breaks, breaking his left leg in 2004, and his right leg in 2006.