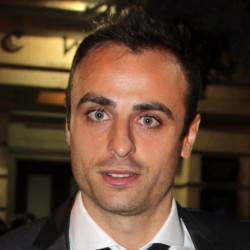 Dimitar Ivanov Berbatov (Bulgarian: Димитър Иванов Бербатов, born 30 January 1981) is a Bulgarian former professional footballer. A striker, he captained the Bulgaria national team from 2006 to 2010, and is the country's all-time leading goalscorer. He is regarded as one of the greatest Bulgarian players of all time.

Born in Blagoevgrad, Berbatov started out with his home-town club Pirin before joining CSKA Sofia as a 17-year-old in 1998. He was signed by Bayer Leverkusen of Germany in January 2001 and played in his first Champions League final 18 months later, coming on as a substitute in the 2002 UEFA Champions League Final, which Leverkusen lost 2–1 to Real Madrid.

After five-and-a-half years with Leverkusen, he joined English club Tottenham Hotspur in July 2006, where he spent two years before moving to Manchester United. He played in his second Champions League final in 2009, during his side's 2–0 defeat against Barcelona. After four seasons with United, during which time he won two Premier League titles in 2008–09 and 2010–11, as well as the Premier League Golden Boot in 2010–11, he joined Fulham in August 2012. He had later spells in France with Monaco, Greece with PAOK, and India with Kerala Blasters, before retiring at the end of 2017-18.

Berbatov made his debut for Bulgaria on 17 November 1999, aged 18. He represented Bulgaria at Euro 2004 which was the only major tournament he played at for his country, owing to the team's failure to qualify for other tournaments. Berbatov captained the team from 2006 until May 2010, when he announced his retirement from international football, leaving his tally for Bulgaria standing at 48 goals from 78 matches. He won the Bulgarian Footballer of the Year a record seven times, surpassing the number of wins by Hristo Stoichkov.