Dirk Werner Nowitzki (German pronunciation: ) (born June 19, 1978) is a German retired professional basketball player. An alumnus of the DJK Würzburg basketball club, Nowitzki was chosen as the ninth pick in the 1998 NBA draft by the Milwaukee Bucks and was immediately traded to the Dallas Mavericks, where he played his entire 21-year National Basketball Association (NBA) career.

Listed at 7 ft 0 in (2.13 m), Nowitzki is widely regarded as one of the greatest power forwards of all time and he is considered by many to be the greatest European player of all time. Nowitzki led the Mavericks to 15 NBA playoff appearances (2001–2012; 2014–2016), including the franchise's first Finals appearance in 2006 and its only NBA championship in 2011. Known for his scoring ability, versatility, accurate outside shooting, and trademark fadeaway jump shot, Nowitzki won the NBA Most Valuable Player Award in 2007 and the NBA Finals Most Valuable Player Award in 2011.

Nowitzki is the only player ever to play for a single NBA franchise for 21 seasons. He is a 14-time All-Star, a 12-time All-NBA Team member, the first European player to start in an All-Star Game, and the first European player to receive the NBA Most Valuable Player Award. Nowitzki is the highest-scoring foreign-born player in NBA history. He is the first Maverick voted onto an All-NBA Team and holds several all-time Mavericks franchise records. On December 10, 2012, he became the first non-American player to receive the Naismith Legacy Award. Following his retirement, Nowitzki stood sixth on the list of National Basketball Association career scoring leaders.

In international play, Nowitzki led the German national basketball team to a bronze medal in the 2002 FIBA World Championship and silver in EuroBasket 2005, and was the leading scorer and MVP in both tournaments. 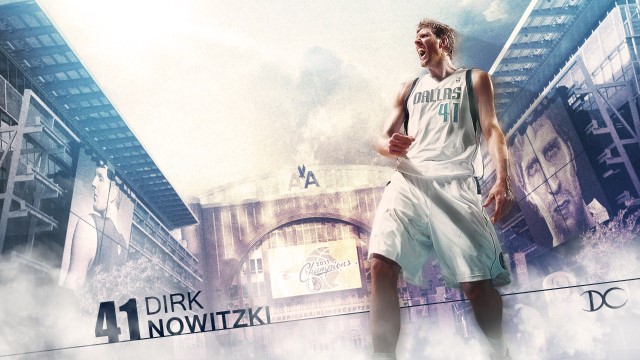