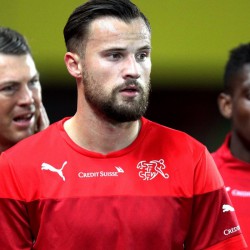 Haris Seferovic (Bosnian: Seferović, pronounced ; born 22 February 1992) is a Bosnian-Swiss professional footballer who plays as a striker for Süper Lig club Galatasaray, on loan from Portuguese club Benfica, and the Switzerland national team.

Seferovic made his professional debut at Grasshopper in April 2009. Shortly after, in January 2010, he was signed by Italian club Fiorentina. Much of his time at the latter club was spent out on loan, with a successful spell at Novara in Serie B, followed by a transfer to Real Sociedad of Spain in 2013. A year later, he joined German club Eintracht Frankfurt, with whom he spent three seasons before a transfer to Benfica in Portugal.