Sebastian Vettel (born 3 July 1987) is a German Formula One racing driver, currently driving for Scuderia Ferrari. He is contracted to remain in that role until at least the end of 2017. He is a four-time Formula One World Champion, having won the championship in 2010, 2011, 2012, and 2013 with Red Bull Racing. He is among the most successful F1 drivers of all time.
In his first year driving for Red Bull in 2009, Vettel finished the season as the youngest-ever World Drivers' Championship runner-up. The following year he went on to become the youngest driver ever to win the World Drivers' Championship, aged 23. In the same year he helped Red Bull win the team's first World Constructors' Championship. He followed up his first championship with three more titles, becoming the youngest double, triple and quadruple world champion in Formula One. Vettel left Red Bull Racing and ended his long-term association with the company after the 2014 season and signed a contract with Ferrari for 2015, after activating a clause to terminate his Red Bull contract early.
Vettel has held numerous other "youngest" Formula One records, among them: the youngest driver to have taken part in an official practice session of a Grand Prix (until Max Verstappen at the 2014 Japanese Grand Prix), to score championship points (until Daniil Kvyat at the 2014 Australian Grand Prix), to lead a race, to secure pole position and to win a race. He is also currently third in the overall tally of pole positions behind fellow German Michael Schumacher and Ayrton Senna and in fourth place among race winners.
Junior series
Vettel started amateur karting at the young age of 3½ and began racing in karts series in 1995, at the age of eight. Having shown early talent, he was accepted into the Red Bull Junior Team at age 11 in 1998, and kept on winning various titles, such as the Junior Monaco Kart Cup in 2001. In 2003, he was promoted to open-wheel cars and won the 2004 German Formula BMW Championship with 18 victories from 20 races. Having impressed in his first season of auto racing in 2003, Vettel was given a chance by Derrick Walker to test a Reynard Motorsport Champ Car in a two-day private test at the Homestead road course.
In 2005 he drove for ASL Mucke Motorsport in the Formula 3 Euro Series. He was placed fifth in the final standings with 63 points, winning the year's top rookie honours. He tested the Williams FW27 Formula One automobile on 27 September as a reward for this Formula BMW success. He then went on to test for the BMW Sauber team.
2006 became a busy year for the 18-year-old racing driver. He drove his second season in the F3 Euroseries, had two guest appearances in the Renault World Series and was promoted to test driver for Sauber in Formula One. A schedule that resulted in a competitive season with several victories, but ultimately no championships.

In the Bahrain Grand Prix, Vettel qualified in third, and finished second behind Jenson Button in the race. In Spain, he qualified in second but finished the race in fourth, behind his teammate Mark Webber who finished in third. Vettel won the British Grand Prix after claiming pole position in qualifying. At the German Grand Prix he qualified fourth and finished second, behind Webber, who won his first Grand Prix. At the Hungarian Grand Prix, Vettel qualified second after an eventful qualifying, but had to retire from the race on lap 30 after his car sustained damage from contact with Kimi Räikkönen's car on the first lap.
At the European Grand Prix, he qualified fourth but had to retire from the race with an engine failure. It was the second engine failure for Vettel during the weekend, and the RB5's reliability issues began to show. He finished third at Spa-Francorchamps, and struggled for pace at Monza, finishing 8th at a race he previously won. He qualified 2nd at Singapore, but was given a drive-though penalty for speeding in the pit lane and damaged the diffuser on a kerb, struggling to 4th. He subsequently won the Japanese Grand Prix from pole position, leading every lap and only being denied of the fastest lap by 0.002 seconds by teammate Mark Webber, who did so on the final lap. He would have to wait until the 2011 Indian Grand Prix until he finally achieved a Grand Slam.

At the Brazilian Grand Prix, Vettel qualified 16th in a rain-hit session, behind title rival Jenson Button (14th) and Rubens Barrichello (1st), while his teammate Webber qualified second with Adrian Sutil in third. Vettel needed to score at least second place in the race to keep his title hopes alive. He finished fourth with Button behind, giving Button the Championship and moving Vettel up into second place. He officially claimed second place by winning the inaugural Abu Dhabi Grand Prix, again ahead of Webber with Button completing the podium. He also scored his third fastest lap of the year, drawing him level with teammate Webber. However, as Vettel had more second fastest laps, he won the 2009 DHL Fastest Lap Award.
On 21 August 2009 it was announced that Red Bull and Vettel had extended his contract until the end of the 2011 season with an option for 2012. The option was later taken up on 14 March 2011, as Vettel extended his contract with the team until the end of 2014.
Vettel mentioned he would like to drive for Ferrari at some point in his career and was rumoured to have a non-binding pre-contract, with options, to join them in 2014. Red Bull believed he would stay with the team for as long as they supplied a competitive car.

On the day Vettel and Red Bull announced parting ways, team principal Christian Horner announced that Vettel was going to sign with Ferrari. From there it took from early October to 20 November for Ferrari to announce a three-year contract with Vettel. At the same time, Ferrari announced that Vettel's long time championship rival Fernando Alonso would be departing the team at the end of the season; meaning Vettel would partner Kimi Räikkönen at the team.

Vettel was denied an early release from his Red Bull contract to test the 2014 Ferrari car in Abu Dhabi post-race. Vettel instead made his first appearance at the Ferrari factory over the weekend of 29–30 November, completing nearly 100 laps around the test track of Fiorano in the 2012 car as well as performing simulator work and completing his first official interview as a Ferrari driver. According to Ferrari's official website, Vettel did however try the simulated 2014 car in the team's simulator program. 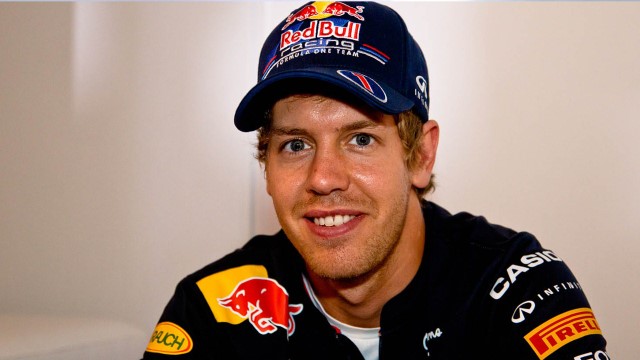