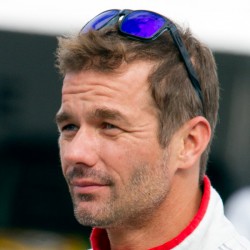 Sébastien Loeb is a French professional rally and racing driver. He competed for the Citroën World Rally Team in the World Rally Championship (WRC) and is the most successful driver in WRC history, having won the world championship a record nine times in a row. He holds several other WRC records, including most wins, most podium finishes and most points. Loeb announced his retirement from World Rallying at the end of the 2012 season. Participating in selected events in the 2013 WRC season, he raced a full season in the FIA GT Series driving a McLaren MP4-12C before moving on with Citroen to the FIA World Touring Car Championship in 2014.
Originally a gymnast, Loeb switched to rallying in 1995 and won the Junior World Rally Championship in 2001. Signed by the Citroën factory team for the 2002 season, he and co-driver Daniel Elena took their maiden WRC win that same year at the Rallye Deutschland. After finishing runner-up to Petter Solberg by one point in 2003, Loeb took his first drivers' title in 2004. Continuing with Citroën, he went on to take a record ninth consecutive world title in 2012. Loeb is a tarmac expert, having won all but three WRC rallies on that surface since 2005.
Besides his success in rallying, Loeb is a three-time winner at the Race of Champions, after taking home the Henri Toivonen Memorial Trophy and the title "Champion of Champions" in 2003, 2005 and 2008. In 2004, he won the Nations' Cup for France with Jean Alesi. In 2006, he finished second in the 24 Hours of Le Mans. Loeb was named the French Sportsman of the Year in 2007 and 2009, and made knight of the Legion of Honour (Légion d'honneur) in 2009. In 2012, he won the Rallycross final in his first appearance at X Games XVIII.