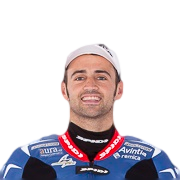 Born in Dos Aguas, Valencia Province, Barberá began his World Championship career at the age of 15 in the 2002 125cc world championship, under the guidance of Jorge Martínez "Aspar", who teamed Barberá and fellow youngster Ángel Rodríguez up with the experienced Pablo Nieto.

In his first season Barberá established himself as the most promising rider of the three and in 2003 he broke through, with his first victory at Donington Park making him one of the youngest riders ever to win a Grand Prix. A strong finish to the season saw him take third place in the championship and he signed up for a title challenge with Seedorf Racing in 2003. Several inopportune crashes and mechanical failures derailed his hopes but victory in the final race secured the runner-up spot and a factory ride with Fortuna Honda in the 250cc class for 2005. After two years with the team he moved to Team Toth in 2007.


Barberá riding an Aprilia at the 2007 Italian Grand Prix.
Barberá survived a huge crash during the Italian round of the championship on June 1, 2008. Running second behind Marco Simoncelli on the penultimate lap who tried to defend his lead by changing his line on the straight, Barberá slipstreamed onto Simoncelli's back wheel and clipped it with his front brake lever. His bike somersaulted through the air, with Barberá escaping somewhat uninjured. However, a further crash in practice at Motegi left him with two spinal fractures, ending his season.

In the 2009 250cc world championship, Barberá won three races along with five other podium results to finish second to Honda's Hiroshi Aoyama. Barberá won the 2009 Valencia Grand Prix, the final two-stroke, 250cc race in Grand Prix history, as the class was to be discontinued in favor of the four-stroke Moto2 class in 2010. On 20 August 2009 it was announced Barberá would move to MotoGP in 2010, riding for the Aspar Racing Team aboard Ducati customer bikes. Barberá finished the 2010 MotoGP season in twelfth place, and followed on in eleventh place in 2011. On 7 November 2011, it was announced that he was moving to Pramac Racing for the 2012 season.