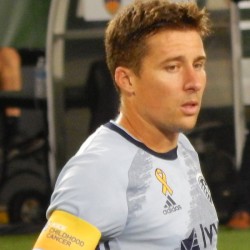 Matthew Scott "Matt" Besler (/ˈbiːzlər/; born February 11, 1987) is an American soccer player who currently plays for Sporting Kansas City in Major League Soccer. A left-sided central defender with the ability to play leftback, he has spent his entire career with Sporting Kansas City, currently serving as captain. He has also been a regular with the United States national team, including at the 2014 FIFA World Cup.

Club career
College and youth
Besler was a four-year All-Conference player at Blue Valley West High School in Overland Park, Kansas. He led Blue Valley West to the Kansas 5A State Championship as a senior, scoring 23 goals with 19 assists, and holds the season and career marks in total points (124), goals (40) and assists (44) at Blue Valley West. He was also a member of the KCFC Alliance club team and a key member of the Region II Olympic Developmental Program (ODP) which competed in the 2004 ESP All-Star game.

Besler played college soccer at the University of Notre Dame, playing in 90 games (73 starts) and scoring 5 goals during his college career. He received All-American and Academic All-American honors as a senior, was named the NSCAA 2008 Senior College Men's Scholar All-America Player of the Year, and was named to the All Big East Team three times. He helped Notre Dame gain four straight berths in the NCAA championship, including the program's first two trips to the quarterfinals in 2006 and 2007.

Professional
Besler was drafted in the first round (8th overall) in the 2009 MLS SuperDraft by the Kansas City Wizards. He made his professional debut on March 28, 2009, as an 87th-minute substitute during a 2–1 loss at the Colorado Rapids. He scored his first professional goal on March 26, 2011, in a 3–2 loss to the Chicago Fire. On July 10, 2011, Besler was added to the 2011 MLS All-Star team via the fan text message vote. In 2012, Besler anchored the top defense in MLS with Sporting Kansas City and went on to help the club win the U.S. Open Cup by converting his attempt after the game against the Seattle Sounders went into penalty kicks. He also was named 2012 MLS Defender of the Year and named to MLS Best XI.


U.S. teammates Michael Bradley and Besler vie for the ball in the 2013 MLS All-Star Game.
Besler was voted into the 2013 All-Star Fan XI.

Throughout the 2018 season, Besler became the all-time leader in each of the club's longevity categories, overtaking club legends such as Davy Arnaud and Kerry Zavagnin for games played, games started and minutes played both in MLS play and in all competitions.

International career
Besler became the regular starting left-center back for the United States under head coach Jürgen Klinsmann. He was rated the top performer during the 2014 CONCACAF World Cup Qualifying matches.

Besler made his debut for United States on January 29, 2013 in a friendly match against Canada. Previously, on August 23, 2012, Besler was called up to the United States squad by head coach Jürgen Klinsmann for a friendly against Mexico, but he didn't feature in the match.

On March 26, 2013, Besler made his first World Cup qualifying appearance in a 0–0 draw at Mexico. On June 2, Besler started as the United States defeated Germany 4-3 in an International Friendly played at RFK Stadium. Subsequently, Besler started in the World Cup Qualifying wins against Jamaica, Panama, and Honduras.

After being left off of the initial roster for the 2013 CONCACAF Gold Cup so that the team could evaluate other players, Besler was added to strengthen the squad after the United States qualified for the knockout round.

Besler was selected for U.S. National Team 23-man roster for the 2014 FIFA World Cup. He started all three games of the group stage and their Round of 16 game, helping the U.S. make it through the group stage for consecutive World Cups. Following his strong performance in the World Cup, several European outfits placed offers and expressed interest in signing Besler, including Freiburg, Fulham and Sunderland. Besler reportedly declined the offers and decided to stay in Kansas City.

He scored his first National team goal on September 2, 2016 with an assist from Sporting Kansas City teammate Graham Zusi. This was also the same day his first child was born.

Besler was a part of the U.S. National Team squad that won the 2017 CONCACAF Gold Cup. Besler made four appearances in the tournament, including a start in the final as the U.S. beat Jamaica 2-1 on a late goal from Jordan Morris as Besler lifted his second international title.

International goals
Scores and results list United States' goal tally first.
No Date Venue Opponent Score Result Competition
1. September 2, 2016 Arnos Vale Stadium, Kingstown, Saint Vincent and the Grenadines Saint Vincent and the Grenadines 2–0 6–0 2018 FIFA World Cup qualification
Personal
Besler is known throughout his hometown of Kansas City for his willingness to give back to the community. On March 1, 2012, he joined forces with the Leukemia & Lymphoma Society (LLS) during the months of March, April and May for the Man of the Year campaign, raising funds for blood cancer research. In April 2012, Besler was named W.O.R.K.S. Humanitarian of the month by Major League Soccer.

He is a fan of his hometown Kansas City Chiefs and Royals. On July 5, 2013, he threw out the first pitch before the Kansas City Royals vs. Oakland Athletics baseball game.

His younger brother, Nick, was drafted by the Portland Timbers 5th overall in the 2015 MLS SuperDraft. He is currently represented by US & Asia-based agency, Libero Sports LLC.

Besler is Catholic. He was raised in a religious family; his father was Catholic and his mother converted from Methodism. Besler regularly attends church and is known to pray the rosary before each game. His favorite religious figures are Saint Christopher and Blessed Pier Giorgio Frassati.

On September 2, 2016 Besler's wife welcomed their first born, a daughter, while he was in St. Vincent for a USMNT game. Just under two years later, Besler welcomed his second daughter to the family in early August 2018.

Besler is close friends with club and international teammate Graham Zusi, as they were drafted in the first year and have both spent their entire careers on the same roster, playing for over 9 years together.