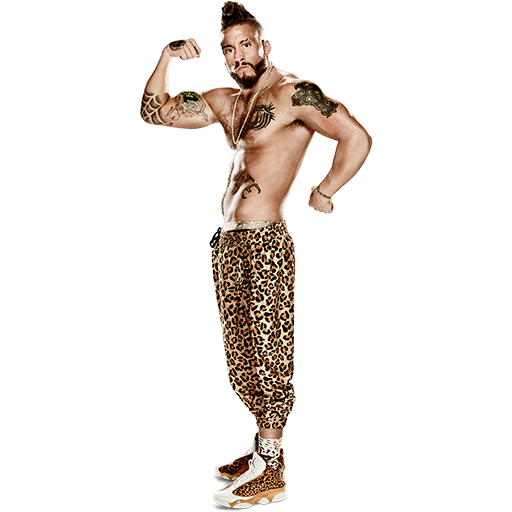 Eric Arndt (born December 8, 1986) is an American professional wrestler. He is signed to WWE, where he performs in their developmental territory, WWE NXT, under the ring name Enzo Amore.

Arndt was born in Hackensack, New Jersey but grew up in Waldwick, New Jersey. There, he attended Memorial Elementary School and Waldwick High School, where he also played football. Arndt continued his football career at Division III (NCAA) Salisbury University, playing linebacker and safety for the Sea Gulls from 2007-2009. Arndt ultimately earned a degree in journalism. He formerly worked as a disc jockey for the New York Jets, a piano mover, and a manager at Hooters.

Arndt had no prior wrestling experience before WWE signed him. He had trained with Joe DeFranco at the DeFranco's Training Systems gym in Wyckoff, New Jersey since the age of 14. By chance, WWE executive Triple H also started training with DeFranco; Arndt, a lifelong fan of professional wrestling, made a compilation video of himself doing various exercises and cutting a promo. When DeFranco showed the video to Triple H, Arndt was given a tryout at WWE, ultimately resulting in his signing. In August 2012, WWE was noted to have signed Arndt, then under the ring name Eric Anthony. He was listed as a wrestler by the ring name of Enzo Amore within WWE's developmental system NXT by November 2012.

Amore made his NXT television debut, being described as a "stereotypical cocky, Jersey Shore loudmouth" and an "outsized version of the man playing the part", on May 22, 2013, where he was quickly defeated by Mason Ryan. Amore went on to form an alliance with Colin Cassady, who had also previously lost to Ryan, and they labelled themselves "the realest guys in the room". In real life, Arndt (Amore) first met Bill Morrissey (Cassady) when Morrissey was 15, when they played basketball together at the Cage of Manhattan, New York nearly 10 years before reuniting on NXT in August 2013.

Despite Amore and Cassady's alliance, Ryan easily defeated them in consecutive singles matches in July, but lost to them in a handicap match. Ryan ultimately had the last laugh when he caused Amore and Cassady to be attacked by Tons of Funk. After the feud with Ryan, Amore and Cassady went on to feud with Alexander Rusev, Sylvester Lefort and Scott Dawson. On September 25 episode of NXT, Amore and Cassady participated in a gauntlet match for a future shot at the NXT Tag Team Championship; they started the match, first defeating C.J. Parker and Tyler Breeze, then beating Rusev and Dawson, but fell to their final opponents, the Ascension.

In November 2013, Amore suffered a broken leg while training. Amore returned on June 26, 2014 episode of NXT, saving Cassady from an attack from Sylvester Lefort and Marcus Louis. In early August, Amore and Cassady participated in the NXT Tag Team Championship tournament. They defeated Jason Jordan and Tye Dillinger in the first round but were eliminated by the Vaudevillains (Aiden English and Simon Gotch) in the second round. Lefort and Louis then renewed their rivalry with Amore and Cassady by attacking them and shaving Amore's beard. As a result, Amore challenged Lefort to a match with the loser's hair as forfeit at NXT TakeOver: Fatal 4-Way. Amore proceeded to win the match but Lefort ran away, leaving his partner, Louis, to lose his hair and eyebrows at the hands of Amore and Cassady.

Amore and Cassady formed an alliance with the debuting Carmella. The duo had accidentally cost Carmella her hairdressing job as per the storyline, causing her to demand to get a job as a wrestler. Carmella had her televised in-ring debut on the October 16, 2014 episode of NXT. Among the trainers at NXT, Amore singled out Bill DeMott and Dusty Rhodes as being instrumental in his training and promos respectively.