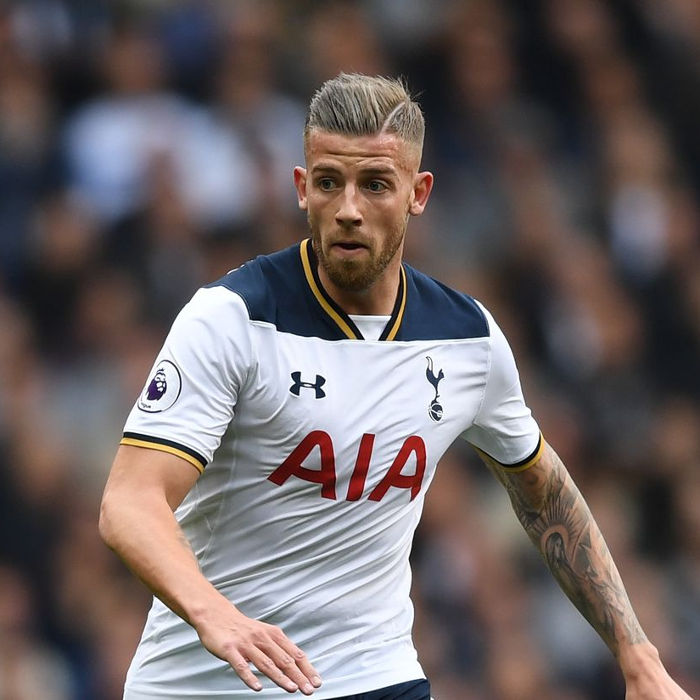 Tobias Albertine Maurits "Toby" Alderweireld (Dutch pronunciation: ; born 2 March 1989) is a Belgian professional footballer who plays for Tottenham Hotspur and the Belgium national team. Mainly a central defender, he can also play as a right back.

Alderweireld began his professional career at Dutch club Ajax, where he won honours including three consecutive Eredivisie titles. In 2013 he moved to Atlético Madrid, where he won La Liga and reached the UEFA Champions League final in his first season.

A full international since 2009, he has earned over 50 caps for Belgium and represented the country at the 2014 FIFA World Cup.

Born in Antwerp, Alderweireld moved to Ajax's youth academy in August 2004 from Germinal Beerschot. On 22 February 2007, he signed his first professional contract tying him to the club until 30 June 2010. He was promoted to the first team for the 2008–09 season but only made his first team debut on 18 January, in the 4–2 victory over NEC Nijmegen. On 26 February, he made his European debut during a 1–1 draw against Fiorentina in the UEFA Cup. Although he only made several appearances for the remainder of the season, he was awarded a new long-term contract extension until 2014.

During the early stages of the 2009–10 season, Alderweireld established himself in the first team and starting eleven. He became first choice centre-back along with fellow Belgian Jan Vertonghen after the departure of former captain Thomas Vermaelen to Arsenal. New coach Martin Jol praised the two defenders and kept faith in the duo after a string of good performances. During the 4 September win against Heracles that ended 3–0, he scored his first league goal for the club when he opened the scoring with a header from Luis Suárez's corner. On 27 January, he scored a late equaliser in extra time during the KNVB Cup quarter final against NEC Nijmegen and Siem de Jong's late goal five minutes before the final whistle sealed a 3–2 win for Ajax. At the end of the 2009–10 season, Alderweireld was named "Ajax Talent of the Year". He assured himself of a place in the Eredivisie giants' history books on 3 November 2011, heading in Ajax's 100th UEFA Champions League goal in the 2–1 Group G defeat by Auxerre. In the 2010–11 season, he scored a stunning 25-yard strike at the San Siro against Champions League group rivals AC Milan in a 2–0 away win. He followed this spectacular goal with an even more impressive 32-yard strike against Feyenoord in a 2–0 home win.

On 8 July 2015, Alderweireld joined Tottenham Hotspur on a five-year contract which runs until the summer of 2020 at White Hart Lane despite Southampton threatening legal action over the transfer. The transfer fee is estimated to be £11.5 million. He was reunited with former Ajax teammates Christian Eriksen and Jan Vertonghen, who previously joined the north London side from Ajax.

On 30 July, Alderweireld made his club debut in the 2015 MLS All-Star Game in Denver, Colorado. During a 2–1 defeat, Alderweireld started the game and was replaced by Federico Fazio after 62 minutes.

On 26 September, Alderweireld scored his first goal for Tottenham in a 4–1 win over Manchester City at White Hart Lane. His second goal for the club came in another 4–1 victory over London rivals West Ham United on 22 November.

On 5 March 2016, in the 183rd North London Derby, Alderweireld scored for Tottenham in a 2–2 draw against Arsenal. A month later, he was Spurs' second scorer in a 3–0 defeat of Manchester United.

During his first season at Tottenham, Alderweireld has been recognised by commentators as one of the best defenders in the Premier League, forming impressive central defensive partnerships with national team colleague Jan Vertonghen, and later the Austrian Kevin Wimmer. This form has helped Tottenham to achieve the best defensive record in the Premier League, with only 25 goals conceded from 34 games.