Scottie Maurice Pippen (born September 25, 1965) is an American retired professional basketball player who played in the National Basketball Association. Nicknamed "Pip", he is most remembered for his time with the Chicago Bulls, the team with which he won six NBA titles. Pippen, along with Michael Jordan, played an important role in transforming the Bulls team into a championship team and for popularizing the NBA around the world during the 1990s.

Considered one of the best small forwards of all time, Pippen was named to the NBA All-Defensive First Team eight consecutive times and the All-NBA First Team three times. He was a seven-time NBA All-Star and was the NBA All-Star Game MVP in 1994. He was named one of the 50 Greatest Players in NBA History during the 1996–97 season, and is one of four players to have his jersey retired by the Chicago Bulls (the others being Jerry Sloan, Bob Love, and Michael Jordan). He played a key role on both the 1992 Chicago Bulls Championship team and the 1996 Chicago Bulls Championship team which were selected as two of the Top 10 Teams in NBA History. His biography on the Naismith Basketball Hall of Fame's website states, "The multidimensional Pippen ran the court like a point guard, attacked the boards like a power forward, and swished the nets like a shooting guard." During his 17-year career, he played 12 seasons with the Bulls, one with the Houston Rockets and four with the Portland Trail Blazers, making the postseason sixteen straight times.

Pippen is also the only player to have won an NBA title and Olympic gold medal in the same year twice (1992, 1996). He was a part of the 1992 U.S. Olympic "Dream Team" which beat its opponents by an average of 44 points. Pippen was also a key figure in the 1996 Olympic team, alongside former Dream Team members Karl Malone, John Stockton, and Charles Barkley as well as newer faces such as Anfernee "Penny" Hardaway and Grant Hill. He wore number 8 during both years.

Pippen is a two-time inductee into the Naismith Memorial Basketball Hall of Fame (for his individual career, and as a member of the "Dream Team"), being inducted for both on August 13, 2010. On November 8, 2005, the Chicago Bulls retired his number #33, while his college, University of Central Arkansas, retired his number #33 on January 21, 2010 as well. 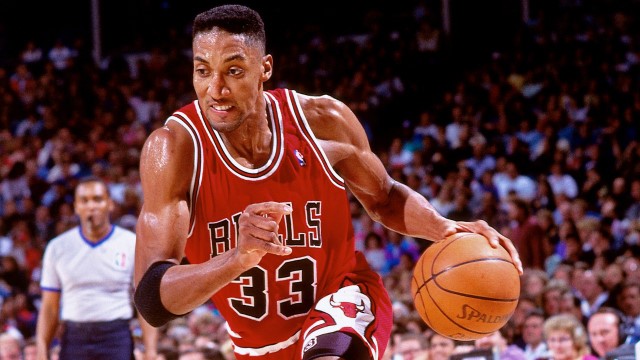