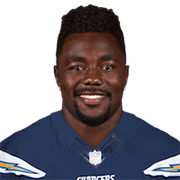 Kenjon Fa'terrel Barner (born April 28, 1989) is an American football running back who is a free agent.
He played college football for the University of Oregon and received All-American honors. He was drafted by the Carolina Panthers in the sixth round of the 2013 NFL Draft. Barner has also played for the Los Angeles Chargers.

Considered a three-star recruit by Rivals.com, Barner was listed as the No. 38 running back in the nation in 2008.

A native of Southern California, Barner chose to attend the University of Oregon and play for head coach Chip Kelly's Oregon Ducks football team. He was ranked by Rivals as the 38th best running back prospect in the country, as well as the 86th overall prospect from the state of California Barner chose UO over scholarship offers from Arizona State and UTEP.

Barner is the first Oregon Duck since 1965 who has scored touchdowns rushing, receiving, and from punt and kickoff returns. He suffered a career-threatening concussion after a helmet-to-helmet hit in 2010.

Barner was considered one of the top running back prospects for the 2012 NFL Draft before announcing he would return to Oregon, where he succeeded LaMichael James as the team's main running back. He was named a top contender for the 2012 Heisman Trophy, eventually won by freshman sensation Johnny Manziel.

In November 2012, Barner set a rushing record for Oregon and for USC Trojans football opponents, with 321 rushing yards; he also scored five touchdowns in the game.

The Ducks won the 2013 Fiesta Bowl. Following his senior season, Barner was named to the AP All-American second team and the All-Pac-12 Conference First Team.

Barner joined the track team following the completion of football's spring drills and competed in two meets at 100 meters and on the 4 × 100 meter relay. He ran the third-leg on Oregon's fourth place 4 × 100 meter relay team at the Pac-10 Championships, where Oregon won its fourth-straight league title with a season-best time of 40.36 seconds. At the 2010 Pac-10 Conference Championships, he ran a career-best time of 10.71 seconds in the 100 meters, finishing 14th in the prelims. He placed 3rd in the 200 meters at the 2011 Oregon Relays, with a time of 22.29 seconds. He also placed 3rd in the 60 meters at the 2011 Washington Husky Invitational, at 7.09 seconds.

During the 2015 preseason, Barner attempted to make the roster behind 3 former NFL starters, DeMarco Murray, Ryan Matthews and Darren Sproles. Looking to make an impact in the return game, Barner found near immediate success. In the first preseason game against the Indianapolis Colts he returned a punt 92 yards for a touchdown to end the second quarter. In the second preseason game against the Baltimore Ravens, he returned another punt for a 68-yard touchdown.

Barner played in 13 games in 2016, rushing 27 times for 129 yards and two touchdowns and recorded five receptions for 42 yards while contributing on special teams as a returner. He was placed on injured reserve on December 20, 2016.

Philadelphia Eagles (second stint)
On September 26, 2017, Barner signed a one-year deal with the Philadelphia Eagles after an injury to running back Darren Sproles. In Week 5, Barner averaged 36 yards on three punt returns, including a 76-yarder, in a 34-7 win over the Cardinals, earning him NFC Special Teams Player of the Week. The Eagles finished the season 13-3, clinching the NFC East division. The team would reach Super Bowl LII, where they defeated the New England Patriots 41-33, winning their first Super Bowl ever.

Personal life
Barner was born in Lynwood, California to parents Gary and Wilhelmenia Barner. He has five older brothers and one older sister. He graduated with a degree in criminology in spring 2012.

While attending the University of Oregon, he was given an honorary membership to the Sigma Phi Epsilon fraternity.