Club career
Early career
Guendouzi started his career at the academy of Paris Saint-Germain at the age of 6. He left Paris to join Lorient's academy in 2014. After representing the Lorient B side, he was promoted to the first team in 2016.

Lorient
Guendouzi made his debut for Lorient on 15 October 2016, in the Ligue 1 match against Nantes in a 1–2 defeat. He played nine times in all competitions, during his debut season of 2016–17 as Lorient were relegated to the second tier at the end of the season.

In the 2017–18 season, Guendouzi featured 21 times for Lorient as they missed out on promotion, finishing seventh in Ligue 2.

Guendouzi playing for Arsenal in 2018
On 11 July 2018, during the summer transfer window, it was announced that Guendouzi had joined Premier League club Arsenal for an undisclosed fee, believed to be in the region of £7m plus bonuses. Head coach Unai Emery said: "We are delighted Matteo is joining us. He is a talented young player and a lot of clubs were interested in him. He has big potential and gained good first-team experience last season with Lorient. He wants to learn and improve and will be an important part of our first-team squad".

On 28 July, he made his second debut in a friendly match against his former club Paris Saint Germain in Singapore. He started the game, impressed and helped his team to beat Paris Saint Germain 5–1. On 12 August, Guendouzi made his Premier League debut in Arsenal's opening fixture of the season against defending Champions Manchester City where he made 72 touches, the most for his team. They lost the match 0–2.

Guendouzi scored the first professional goal of his career on 4 October, rounding off the scoring in Arsenal's 3–0 away win over Qarabağ FK, a low drive from just inside the penalty area, after an assist from Alexandre Lacazette.

Following a post-match altercation with Brighton & Hove Albion player Neal Maupay on 20 June 2020, Guendouzi was excluded from Arsenal trainings and left out of the club's match-day squads due to a history of issues with his "attitude and general conduct."

Hertha BSC (loan)
On 5 October 2020, Arsenal announced that Guendouzi would be loaned out to Hertha BSC for the duration of the 2020–21 season.

International career
Guendouzi was born in a suburb of Paris, France. He has represented France at levels up to France U20s. With partial Moroccan heritage, Guendouzi was approached by Morocco manager Hervé Renard in 2017 to change allegiances to play for the Morocco national team. However, after Guendouzi's father met Renard in March 2017, Guendouzi decided to remain and pledge allegiance to France.

On 2 September 2019, Guendouzi was called up to the French senior side for the first time to replace the injured Paul Pogba for UEFA Euro 2020 qualifiers against Albania and Andorra. However, he was an unused substitute in both matches. 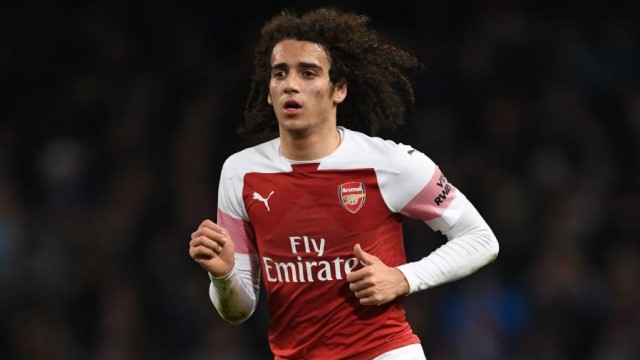